The First Friday of September was a spiritually emotional day for Bonnie Coyle as it was the first time since March that she participated in Eucharistic Adoration. 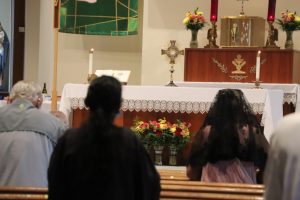 Coyle has been a devotee of adoration for many years, finding great comfort in spending quiet time with the Lord in addition to attending Mass. The COVID-19 Pandemic physically separated her, and many others, from the Lord for an extended period and this distressed her greatly.

“I love coming to Mass, but adoration has always been special for me,” Coyle explained. “I just never realized how special it was and how much I would miss it when it wasn’t available. I was worried about coming back for health reasons, so I stayed away even longer. But I am back, and I feel a great relief to again be able to quietly pray before the Lord!”

Coyle was not alone, as many stayed for adoration on Sept. 4, 2020 following the Mass at Our Lady of Lourdes Parish in Venice.

While public Mass resumed in the Diocese of Venice in late May, adoration followed more slowly as Parishes figured out the best way to do so while still ensuring health and safety protocols were being followed.

Instead of taking place in the Parish Chapel, the Mass and adoration at Our Lady of Lourdes took place in the main Church, thus allowing the 100 or so present plenty of space to participate in both without concern.

At Parishes throughout the Diocese, the offering of Eucharistic Adoration has required some changes. Most parishes have designated days and times for adoration with many including the First Friday of each month. When possible, Parishes with small Adoration Chapels have created a reservation system for adorers.

The occasion of the fifth anniversary of the Perpetual Adoration Chapel at St. Michael Parish in Wauchula during the ongoing Pandemic led to a unique celebration Aug. 29, 2020.

Parish Administrator Father Oscar Mendoza Moya led a procession of vehicles, while riding in the bed of a pickup truck with the Blessed Sacrament in a monstrance. The procession went from the Parish to Holy Child Mission in Bowling Green, then on to San Alfonso Mission in Zolfo Springs, before returning to the Parish. At each location, Father Moya offered a special blessing. The celebration concluded with a Mass of Thanksgiving in the main Church.

Lucinda Perez described the entire evening as amazing. “What a beautiful way to honor Jesus Christ and celebrate the Adoration Chapel and for the Parish and Missions to come together.”

Bishop Frank J. Dewane encouraged the expansion and availability of Adoration in an Aug. 5, 2020 letter to the priests of the Diocese. “This will be of great help and consolation to the Faithful during these turbulent times, when the People of God long to be close to the Lord,” Bishop Dewane wrote.

Pope Francis is a strong proponent of participating in Eucharistic Adoration, describing it as a way of putting the Lord at the center of one’s life. The Holy Father includes adoration in many public celebrations. Most notably, on March 27, 2020 Pope Francis presided over the Eucharistic Adoration before he imparted the “Urbi et Orbi” blessing from outside St. Peter’s Basilica, before the empty square where he usually has the general audience. 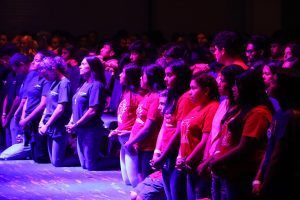 The superlatives from the nearly 2,000 high school Catholic teens who attended the 2019 Diocese of Venice Youth Rally helped to best describe the day.

“Absolutely incredible!” “Amazing!” “Inspirational!” “Awesome!” “Powerful!” “Wonderful!” “Uplifting!” “Moving!” “Spiritual!” These are just some of the reactions from the teens who participated in the Nov. 2 Youth Rally at the Charlotte Harbor Event and Conference Center in Punta Gorda. 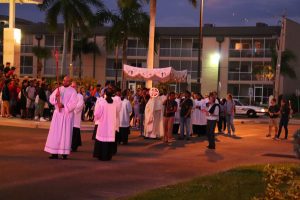 The theme for the 2019 Youth Rally was “Called by Name” (Isaiah 43:1), which served to remind the young women and men that the Lord knows them and calls each by name to become strong in the faith life.

Organized by the Diocese Office of Evangelization, the day was filled with talks, music, adoration, opportunity for the Sacrament of Reconciliation, and a Eucharistic Procession through the streets of Punta Gorda. The lessons learned throughout the day were reinforced in the closing Mass, encouraging the teens to open their heart to the call of the Lord and receive the gift of faith.

Bishop Frank J. Dewane began the day asking the youth for a shout out to Jesus. The response of nearly 2,000 teens was inspiring.

“Let this Youth Rally be something that strengthens you in your faith,” Bishop Dewane added. “I want you to leave this day with a heart that is open to Jesus because you are each “Called by Name.” Jesus sees each of you as important. It is through that call that you are made to be a Disciple of Christ – created by your response to the call of the Lord, a response from the heart of each individual here.” 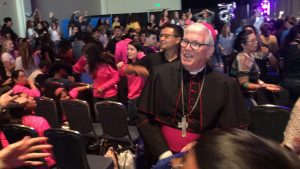 Appropriately, the Gospel reading for the closing Mass was from the Gospel of Luke, the story of Zacchaeus, a tax collector perched in a sycamore tree whom Jesus “Called by Name.”

“Zacchaeus received a gift of faith and accepted the Lord’s call with joy because he allowed his heart to be open,” Bishop Dewane said during the Mass. “You must respond to that gift of faith and act – be doers of your Faith. See Christ within yourselves and in those around you. Just as we know Zacchaeus was a sinner, so too are we. In this we are comforted knowing that the Lord calls us each by name – no matter our sins.” 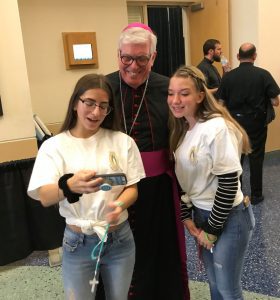 The closing Mass was celebrated at nearby Sacred Heart Church. A time for Eucharistic Adoration led by the Bishop was followed by a public Eucharistic Procession through the streets of downtown Punta Gorda as the youth recited the Holy Rosary and sang hymns. At the church, to accommodate the vast number of participants, an overflow of youth was ushered into the Parish Hall where the Mass where the was live-streamed.

Throughout the day, the youth were encouraged to take selfie photos with Bishop Dewane and to post any images they took during the day to Instagram with the offer of a prize to two lucky people of Apple Air Pods. 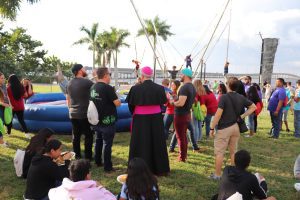 Each participant received a Youth Rally t-shirt and during the dinner break there was time to go outside behind the Conference Center and relax with friends or enjoy several inflatables as well as a climbing wall.

The Youth Rally, which included young people from 9th through 12th grade, included talks from Noelle Garcia and D.J. Bernal as well as music from the Taylor Tripodi Band. 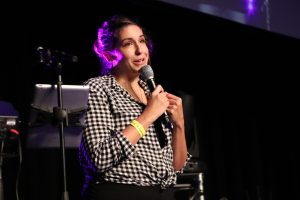 The first speaker of the day was Noelle Garcia, a Catholic recording artist and speaker, wife, and mom to five kids. She has travelled the country for more than 10 years sharing the faith through witness, Scripture, catechesis, and music. Her message was to explain how the love of the Lord can overcome any obstacle or feeling of loneliness that young people so often face today. 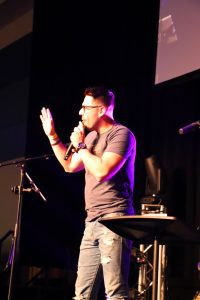 D.J. Bernal also speaks at conferences throughout the United States and works with young Catholics in the Archdiocese of San Antonio. He suggested to the youth that by opening one’s heart just a bit, life can be transformed by the power of the Holy Spirit.

The young men and women were spilt up for a time to hear specific messages directed toward them from Garcia and Bernal. During those sessions, the youth also heard about how to listen to God’s call and how they and sons and daughters of God.

In the split session, there was a special emphasis on answering one’s vocation in life, whether as a priest, religious, married or single. 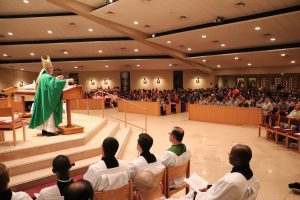 Father Shawn Roser, the Diocese Vocations Director and Parochial Vicar at St. Joseph Parish in Bradenton, spoke to the men about his vocations journey. Also present for the Rally were 13 of the 17 active Diocesan seminarians. They manned a booth and answered questions from fascinated teens and were altar servers during the closing Mass.

Sister Gema Ruiz, S.S.V.M., of St. Michael Parish in Wauchula, spoke to the women. She shared a video of a woman who is from the Diocese and is currently working her way toward making her perpetual vows as a religious sister. Religious women from several parishes were present for the Rally and they each had a booth to generate interest in a vocation to the religious life. 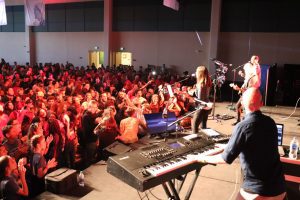 The Taylor Tripodi Band performed throughout the day, opening the Youth Rally and then performing leading up to adoration. Taylor explained that she uses her talents as a singer and a musician to glorify the Lord and to inspire others to feel the same way she does about her faith. The band also served as musicians during the closing Mass.

The first Youth Rally was held in 2008 at the encouragement of Bishop Dewane and it has become so popular that the annual event has outgrown four previous venues. Organized by the Office of Evangelization and Office of Youth and Young Adults, planning for the 2019 Diocese of Venice Youth Rally is already taking place. See you all next year. 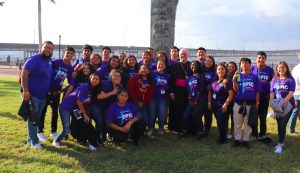 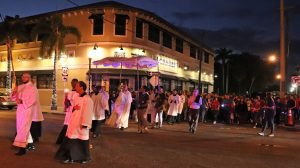 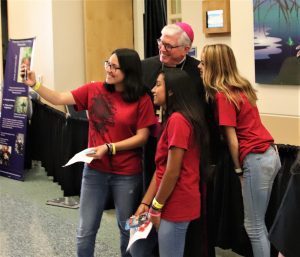