Combine those things and you have a formula for a successful “Teen Service Week” for youth who are preparing to receive the Sacrament of Confirmation at St. Thomas More Parish in Sarasota. 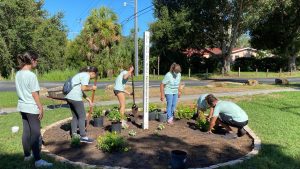 Robbie Anderson, the Director of Religious Education and Youth Outreach at St Thomas More, views the service week as an opportunity to challenge the youth and get them thinking about the world in which they live. The theme for Service Week 2022 was “On a Mission of Peace.”

On each morning of the week of Aug. 1-5, the teens met with assigned leaders at the Parish and prayed together. Several days during the week, depending on the daily schedule, there was the opportunity to participate in Mass. 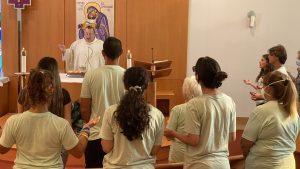 Father Gordon Zanetti, Pastor of St. Thomas More, encouraged the youth remain open to the Lord as they participated in the service. They must also be open to a vocation, or calling of the Lord, whether it is as a priest, in religious life, or in a vocation to help the poor. “Whatever vocation you are called to, hear the Lord and respond.” 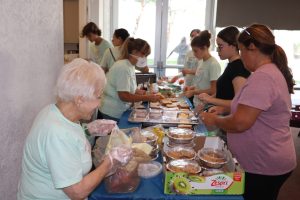 Among the activities the youth took part in throughout the week included a trip to the Sarasota National Cemetery where they assisted in a cleaning project; delivered food for Meals on Wheels; organized the Moms Helping Moms store; heard a talk from counselors at NAMI (National Alliance for Mental Illness), and helped at their youth center; built a garden around the Parish peace pole near the main entrance to the property; made and delivered lunches to homeless on the streets of Sarasota (with adult chaperones); and lastly, sorted and packed food at All Faith’s Food Bank. 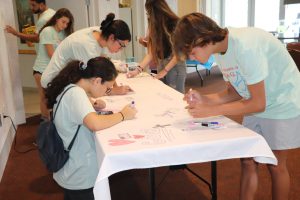 The service week provided Lilly Mae Stewart, 17, an opportunity to challenge herself as the group reached out into the community and helped people in a variety of ways. “It was about making a real connection.”

Charlie Flint, 15, said “this week has been really touching,” because he saw how “good work can really effect the people in the community.” 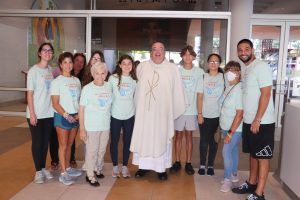 Each day began by 7 a.m. and concluded by 9 p.m. To keep their experience humble, they made their own bag lunches each day, and were allowed limited time on their phone, something that can sometime be a hardship, but did not bother the team as they remained focused on their tasks. In addition, as the week progressed, the teens were asked to create a banner with key images, words, and messages they learned, as well as symbols from their “Service Week.” The words and messages on the banner included: “Peace!” “Give!” “Happiness!” “Forming Strong Connections!” “I Love Humility!” “Friends!” “Helping Mothers!” “God Loves You!”

At the conclusion of each day, the teens finished with a sponsored meal, played outdoor games and prayed together. There was also time for group reflections. This time gave the teens the opportunity to discuss their experiences and properly put them into the context of their living as children of God.

It was obvious to Anderson, as well as to the other adult volunteers, that the week made a real impact on the youth in various ways.

“At our daily reflection many said they were made much more aware of the poverty right here in Sarasota that they never imagined existed,” she said. “They were also saying they need to raise awareness about what they learned.”