Invoking the Holy Spirit, Bishop Frank J. Dewane recently called upon legal professionals to have insight and grace and above all be people of mercy. 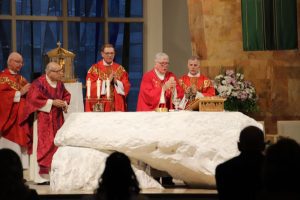 Bishop Dewane made these remarks during two Red Masses in late October for legal professionals. The name for the Masses comes from the red vestments worn by the celebrants, and for the calling of grace and guidance from the Holy Spirit to come upon all who seek and serve justice.

The Diocesan Red Masses were celebrated on Oct. 21, 2021 at St. Martha Parish in Sarasota and Oct. 23 at St. Agnes Parish in Naples, but the history of the Red Mass dates to the mid-1200s when Pope Innocent IV celebrated a Mass in the Cathedral of Paris for the Ecclesiastical Judicial Court. Pope Innocence invoked the Holy Spirit as a source of wisdom, understanding, counsel, fortitude and strength for the coming term of the court.

Bishop Dewane described the Red Mass as a cry from the heart for the guidance of the Holy Spirit and the opportunity to pray for the strengthening of the link between the administration of our law and the ultimate justice that is the Gift of God. 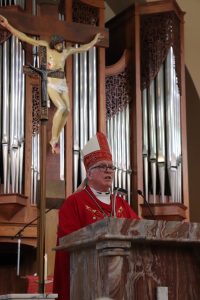 “The Church is keenly aware of your promotion of the common good,” the Bishop stressed. “Your generous service is often a concrete manifestation to build a society which is truly tolerant and inclusive – to safeguard the right of individuals and communities and to reject any form of unjust discrimination.”

While the administration of the law is inevitably imperfect, legal professionals are often at the center of the debates facing a fierce passion of resentment.

“That debate must have a faith component,” Bishop Dewane added. “In essence, the contribution lies in the incessant proclamation of the transcendent dimension of the person; or the proof that every person is made in the image and likeness of God, comes from God, and is destined for God.”

“This truth of humanity is the source of our strong and unrelenting affirmation of the innate dignity of every human being,” the Bishop continued. “This is the witness of faith – this is that every person is endowed with the dignity that arises from our Creator.”

The Bishop reminded the legal professionals that mercy is personal and they only need to remember that there are good people at the heart of what they do and affected by the decisions they make. 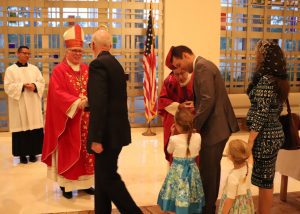 “The law deals with codified rights rather than an innate human dignity which resides in every human person,” Bishop Dewane concluded. “Here lies the tension which we often bring ourselves before the Lord.”

The Catholic Lawyers Guild of the Diocese of Venice sponsored the Mass in Sarasota. It was this organization which brought the first Red Mass to the Diocese of Venice in 2008 in an effort to emulate similar, more well-known Masses which take place each year for the U.S. Supreme Court in Washington, D.C., and by the Florida Bishops for the Florida Legislature in Tallahassee during the annual Catholic Days at the Capitol.

Guild members thanked the Bishop for his continued unfailing support and prayers for the legal community in the area. The Catholic Lawyers Guild of the Diocese is a not-for-profit corporation formed exclusively for charitable and educational purposes, to promote the spiritual, intellectual and social welfare of its members, who serve the cause of justice consistent with Roman Catholic moral teaching.

The Mass in Naples was celebrated as part of the Catholic Bar Association General Assembly and Annual Conference which took place from Oct. 22-23 at the Ave Maria School in Law.

Bishop Dewane was the main celebrant for the Conference’s Red Mass, with Most Rev. Felipe de Jesús Estévez, Bishop of St. Augustine, concelebrating and delivering the St. John Fisher Lecture during the closing Red Mass banquet.