With the idea that those who work in the judicial system touch the very fabric of our culture and society, a structure that must always first consider the dignity of the human being above all else, an annual Red Mass was held Oct. 22 at St. Catherine Parish in Sebring for legal professionals in Highlands County. 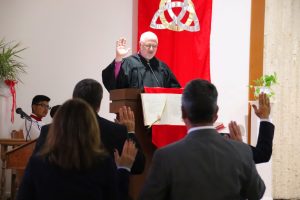 The Mass, which was celebrated by Bishop Frank J. Dewane and concelebrated by priests from the area, invokes the blessing and guidance of the Holy Spirit upon those in the legal community.

“Our prayer is that you receive the grace of wisdom, courage, compassion and right judgement, while seeking always to uphold the dignity and the rights for every person and the good of the community,” Bishop Dewane said.

Citing the 1965 Vatican II document Dignitatis Humanae (Declaration on Religious Liberty), Bishop Dewane noted that is was partially based on the U.S. Bill of Rights, notably the First Amendment, the freedom of religion.

“Religious freedom means we have the right to live out our religious convictions in a modern society,” the Bishop continued. “To give witness to them. To be the leaven in society through the living of our faith. In our work regarding religious liberty; we are asking for space to serve with integrity.” 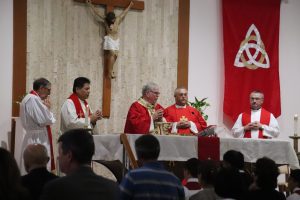 Bishop Dewane acknowledged that while those in the legal profession may serve the legal system in different ways, they first and foremost serve the Lord. The Red Mass serves as a poignant reminder, to those who participate, about who they are and from where they originate.

Highlands County Circuit Judge Anthony Ritenour expressed the feelings of many present best when he thanked Bishop Dewane for celebrating the Mass and inspiring the legal professionals of Highlands County to remember their roots which are based in faith.

“I always enjoy coming to this,” Judge Ritenour said. “The idea of Freedom of Religion that founded this country – that set the point for justice – is something we must all be reminded.”

Following the Mass, Judge Ritenour led the attorneys in the traditional renewing their oath. While leading the group, the judge put a particular emphasis on the closing words of the oath: “so help me GOD!”

The tradition dates to the 13th century Europe for the courts of the day and earned it’s name by the red robes worn by the judges. Liturgically, the Red Mass is celebrated as the Solemn Mass of the Holy Spirit. The traditional red color of the vestments worn by clergy during the Mass represent the tongues of fire symbolizing the presence of the Holy Spirit.

In the United States, the Red Mass tradition was inaugurated in 1928 at Old Saint Andrew’s Church in New York City. Each October, before the start of the U.S. Supreme Court’s new term, a Red Mass is celebrated at the Cathedral of St. Matthew the Apostle in Washington. Florida Bishops celebrate a Red Mass for the Florida Legislature in Tallahassee each year. The first Red Mass in the Diocese of Venice was in 2008 and is celebrated annually in both Sarasota and Sebring. The 2019 Sarasota Mass in was Oct. 2 at St. Martha Parish.

Since the first Red Mass in the Diocese of Venice was held in Sarasota at St. Martha Church on March 14, 2008; more questions have arisen as to its significance, its history and purpose.

The Red Mass is a special liturgy steeped in Catholic Church tradition since 1245, when the first on record was held in the Cathedral of Paris. It is a liturgy based upon the prayers invoking the blessings of the Holy Spirit to bestow His gifts (among them: wisdom, understanding, counsel, knowledge) upon those who serve in the administration of justice. 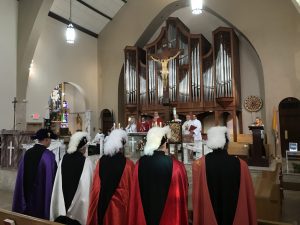 The popular name “Red Mass’ was derived from the red vestments worn by the judges of the royal courts of Europe. However, it was King Edward I, who started the tradition in 1310, of convening the judges at Westminster Abbey for the annual Mass. The Red Mass is a continuing tradition in Australia, Canada, France, Germany, Italy, Ireland, Philippines, Scotland, Wales and other countries although Catholics may not be the majority of the countries’ population.

The first Red Mass in the United States was held at St. Peter and Paul Church in Detroit Michigan in 1877. However, the first official Red Mass is recognized as the one held in New York City in 1928. According to a Time Magazine article it was President Dwight Eisenhower, (Presbyterian) who encouraged his cabinet members to attend the Red Mass held in Washington, D.C., which he attended in 1953, in an effort “to show the nation’s communist adversaries that the United States was not anti-religion.”

Many criticisms have been leveled against the practice of the Bench and Bar attending a Catholic Mass together. However, it must be noted that the U.S. Constitution’s First Amendment guarantees the freedom of every individual to worship in the manner of the individual’s choice.  After all, what is there to argue about when praying is asking for what is good. The Red Mass is open to every person of faith. Each event may include a renewal of the lawyer’s oath to serve in truth and justice.

At the nation’s capital, the Red Mass is celebrated annually on the Sunday before the first Monday in October, for opening of the term of the Supreme Court. Persons who serve in the Executive, Legislative and Judicial branches of the government have frequently participated. In Tallahassee, the Red Mass is held before the opening of the State Legislature and includes all of the Bishops of Florida.

The Red Mass is presided by a Bishop. It is usually hosted by a Diocese, or Catholic law organizations such as a Thomas More Society (named after the Catholic chancellor beheaded by King Henry VIII for disobedience), or the John Carroll Society (named after the only Catholic signer of the Declaration of Independence) or the Catholic Lawyers Guild, such as the one hosting the Red Mass 5:30 p.m., Oct. 24 at St. Martha Parish, 200 N. Orange Avenue, Sarasota.

Bishop Frank J. Dewane will be the principal celebrant. The Mass is intended for judges, lawyers, lawmakers, their families, and staff.

The Catholic Lawyers’ Guild of the Diocese of Venice is also introducing an award to a person the Guild deems as demonstrating the exemplary attributes of a faithful servant of the law while giving glory to God.

Bishop Dewane will also be celebrating a Red Mass at noon, Nov. 16 at St. Catherine Parish, 820 Hickory St., Sebring. All Catholic members of the legal profession in the Eastern Deanery (Highlands, Hardee, DeSoto, Glades and Hendry counties) are invited and encouraged to attend. For additional information, please call the Parish at 863-385-0049.