The Hispanic Fall Festival at St. Jude Parish in Sarasota returned from a two-year hiatus on Nov. 5, 2022, with a day filled with food, fun and entertainment. 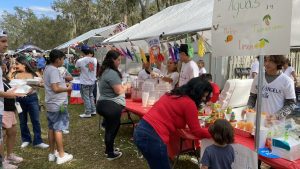 This was the 18th Annual Hispanic Festival and an estimated 12,000 people descended on the Parish for this return event following a hiatus in 2020 and 2021 because of the COVID-19 pandemic.

The annual festival is a celebration of both the individual nations and the unified culture of a diverse people. Held annually in early November, the day includes musical performances and ethnic dancers as well as food from many nations. Throughout the Parish grounds were tents full of a wide variety of foods that left many mouths watering.

The celebration of more than a dozen countries lasted from morning until sunset. Throughout the day, there were performances from a variety of countries, offering both folk and modern music and dance. Many wore shirts proclaiming to everyone their country of origin.

Alegria Fredrick, 12, enjoyed her papas rellenas from the Cuban food tent, which is a meat-filled potato ball. The highlight of the day for the young girl were the various dancers who wore colorful dresses. “It was so wonderful to see them dancing and singing to such beautiful songs.” 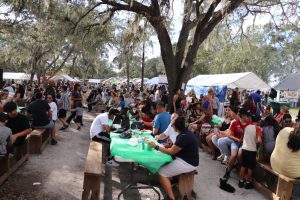 Father Celestino Gutierrez, Pastor of St. Jude, officially opened the Hispanic Festival with a prayer. This followed a “Parade of Flags” when each country represented at the festival was announced, and the respective flags brought forth cheers from the crowd.

As a bilingual Parish, the members of both the English and the Spanish speaking congregation participated and volunteered to staff the booths including a beverage stand run by youth from the Parish. This annual Festival is the oldest one in Sarasota County to feature authentic Latino food, music and culture.

Whether it was the food, the music, the dancing, or the joy of being around so many happy people, the Hispanic Festival was rated a massive success by any measure.

Thousands attend the event annually from as far away as Naples and Clearwater. It has become a much-anticipated event for the ethnically diverse Sarasota Parish. All of the proceeds of the Hispanic Festival go to support the various outreach efforts of St. Jude Parish, including a food pantry and other outreach efforts which help countless families throughout the year.