It was in 1919 when the first celebration of Veterans Day took place. It was then known as Remembrance Day as Nov. 11, 1919 marked the anniversary of the end to World War I, the “war to end all wars.” 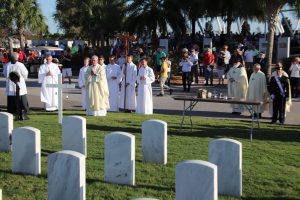 On the 100th Anniversary of Veterans Day, and for the 10th year in a row, the Diocese of Venice celebrated a Catholic Mass at Sarasota National Cemetery with more than 1,300 people in attendance.

“What a wonderful day,” said Charles Thatcher of St. Michael the Archangel Parish in Sarasota who served with the U.S. Marines from 1958-1967. He was wounded in combat while serving in Vietnam and was medically discharged. Wearing a pin with the Marine Corps emblem, Thatcher said he is happy that the Diocese pays tribute to the veterans with the annual Mass at the National Cemetery.

“This Mass is an important reminder,” Thatcher added. “Once we served and took off the uniform and entered civilian life many people tend to forget about what we sacrificed. My sacrifice was the loss of a few fingers and part of my sight. I have friends who lost everything. They are who we really honor, those who gave the ultimate sacrifice for the freedom we all enjoy.” 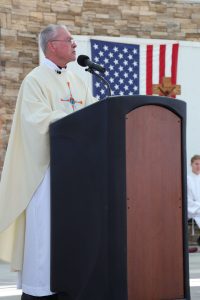 Father Edward Martin, who served 20 years as a U.S. Army Chaplain and is Temporary Administrator of St. Isabel Parish in Sanibel, celebrated the Mass for Bishop Frank J. Dewane, who was unable to attend due to a commitment at the annual meeting of the United States Conference of Catholic Bishops. More than a dozen Priests and several Deacons joined Father Martin.

Father Martin thanked the veterans for their service in defense of liberty, something enjoyed to this day thanks to those who served and sacrificed for this nation dating back to George Washington.

“Our freedom and liberty are ultimately our greatest responsibility,” Father Martin said. “We are free because we have men and women heroes who are champions of courage and choose to put their very lives on the line to protect that freedom.” 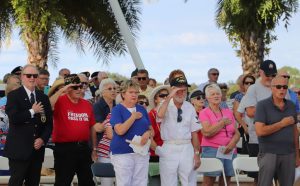 Adding to the dignity and ceremony of the day were active and retired veterans – some of whom attended in uniform, as well as the Fourth Degree Knights of Columbus who formed a Color Corps, and many other Knights who were there to support the veterans.

There are 20,900 veterans and eligible family members currently interred in the National Cemetery and more than 19 million military veterans in the United States. 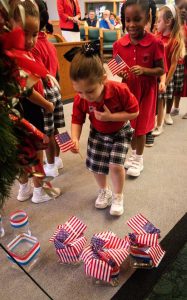 The Diocese of Venice coordinates the Catholic Mass at the National Cemetery with the support of the Knights of Columbus. One of the graves is that of Father Robert G. Tierney, a former assistant at St. Joseph Parish in Bradenton, who served in the U.S. Navy. Father Tierney died in 2006 and was one of the first people buried in the cemetery.