With seemingly no effort, 13-year-old Jax Scott can work a baton like a seasoned veteran, performing moves and tosses only elite twirlers can master after many years of failure and practice. 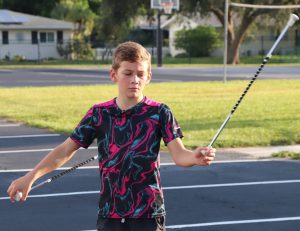 Yet, in little more than two years of hard work and dedication, Jax, an eighth-grade student at Incarnation Catholic School in Sarasota, earned the right to represent the USA at an international competition after taking the top prize at the July 2022 U.S. National Baton Twirling Championships in Stockton, California.

“It felt great,” Jax said. “I was proud of myself working the past few years competing and when I went to nationals, the first goal was to qualify for team USA. And I did it.”

At nationals, Jax took first place in the two baton and artistic twirl competitions and second in the solo competition. His overall score earned him the right to go to the August 2023 International Baton Twirling Federation Nations in Liverpool, England as a representative of TEAM USA.

Jax credits his parents, family, coaches and friends for supporting him in what is primarily known as a female-dominated sport. This does not matter as he focuses on learning new tricks, having exciting experiences and makes friends from across the country.

“Not many think it’s cool or fun, but I do,” Jax said. “My friends are really supportive and are happy when I master new tricks… My advice is, do not give up on what you are practicing. Ask your coaches, and they will help you and guide you through them… And if you cannot catch it, improve by the loss… This is a sport originated by men and when I saw what was possible, I knew it was cool. The great thing is you can be innovative with your routine… there are fire batons, glow batons and even breakdancing.” 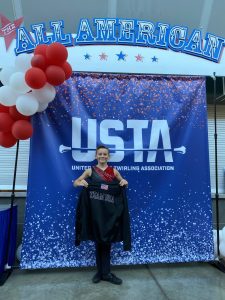 It was a family house cleaning that put Jax on the road to success in the early days of the COVID-19 shutdown in 2020. “I came across the baton and didn’t even know what it was, but then I would do tricks that most beginners wouldn’t be able to do… After my first lesson, I just fell in love with it. I would practice every day, right after school.”

The baton was his mother’s, Jennifer Neumann, who was a baton twirler as a young girl but had moved on to other passions, putting the tool in storage for her family to find many years later.

“We saw right away how skilled he was and how passionate he became,” Neumann said.

Realizing this was not just a passing fancy, Jax’s parents contacted twirling coaches Cody Carter and Jennifer Marcus, who have helped guide the young student to excel.

Jax sees Carter as his idol and mentor. Carter is an honors student at Arizona State University who has been twirling since he was seven years old and is a three-time world champion who also appeared at the age of 14 on season 11 of America’s Got Talent.

After watching many twirling videos, and a few online chats during several Zoom calls, Jax finally met his idol in person. Marcus is his Florida-based coach who lives on the east coast and meets with Jax once a month.

Both are readily available when Jax has questions regarding learning new routines and how to prepare for competitions. 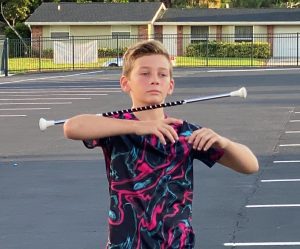 The thing that most attracted Jax to the sport was the extreme difficulty of learning how to manipulate the baton to complete harder and harder tricks which drove him to push himself to try harder whenever something did not work immediately.

“You are going to mess up every so often during your routines, like dropping or forgetting tricks,” Jax said. “But you try again and again. Looking back at my early work and I wasn’t even doing it right and then to see how much I have improved, that is very satisfying and helps push me to work harder.”

Jax will spend the next year practicing one to two hours each day after school. So far, he has more than 35 tricks in his repertoire and his athleticism enables him to include cartwheels and high tosses while manipulating and spinning two batons.

Neumann said it is hard to express the amount of hard work and dedication Jax put into becoming the top baton twirler in his age group.

“We are extremely thankful for our Parish and school for their support,” she said. “It is important for others to see what Jax can do in a short time and perhaps be able to experience the love and passion he has for baton.”

Neumann added that their three youngest children are also taking up the baton and the family is working to raise money to help offset the costs of the trip to England next year. A Go Fund Me page has been set up, which can be found by searching for IBTF Nations Cup World Competition, or by using this link, https://www.gofundme.com/f/ibtf-nations-cup-world-competition?utm_medium=email&utm_source=product&utm_campaign=p_email%2B2300-co-team-welcome.