Bishop Frank J. Dewane will deliver the invocation for the 20-Year Commemoration of 9/11 being held in Patriot Plaza at Sarasota National Cemetery. 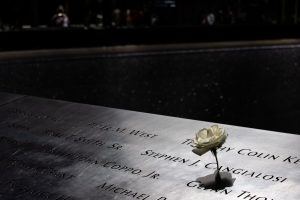 The Commemoration, organized by the Sarasota Ministerial Association, will begin at 6 p.m., Sept. 11, 2021, the anniversary of the 2001 terror attacks on the United States. The memory of those who died will be honored. All first responders, active military, POW/MIA and veterans will also be recognized. There will be a call for all Americans to the “Unity of One Nation Under God.”

In the days leading up to the Commemoration, those interested can choose to represent a person who was killed on September 11 by standing at the appropriate time during the ceremony. Names of the deceased can be selected at https://bit.ly/911FREETickets. During the Commemoration all will be invited to stand and state the name of the Fallen during the Sarasota Fire Department’s “Tolling of the Bell.” Later in the service, participants will again be invited to stand for their Fallen while the bagpipers play Amazing Grace.

For the first 500 attendees arriving to the Commemoration, flowers will be presented and placed in a mesh that will eventually become Old Glory, the American flag, located in front of the stage. Those arriving before 5:55 p.m., may place memorabilia of their chosen Fallen on the Gallery surrounding the American” flag of flowers.”

Several priests from across the Diocese will also be present for the Commemoration and process in with other clergy and distinguished presenters during the opening. In addition to guest speakers, a 70-member community chorus will perform. Special commemorative coins have been minted to mark the occasion and will be presented to 9 /11 Survivors, First Responders, military veterans, active-duty military, and Sarasota Elk Lodge member in attendance.

For those unable to attend the Sarasota 9/11 Commemoration, St. Peter the Apostle Parish, 5130 Rattlesnake Hammock Road, Naples, will once again be having its annual 9/11 Memorial Mass at 3:30 p.m., Sept. 11.  The Parish is home to a 9/11 Cross made from the steel of the World Trade Center and has hosted a commemorative Mass each year since 2001. For more information, please contact St. Peter the Apostle Parish at 239-774-3337 ext. 201.