St. Agnes Parish in Naples hosted an annual Blue Mass on Jan. 29, 2022, to honor and remember the service of active, retired and fallen law enforcement officers, firefighters and first responders who offer their lives in service to the community to keep us all safe and well. A crowd of more than 500 were present. 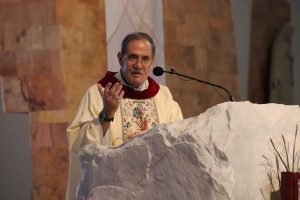 The opening procession was led by a bagpiper, the Knights of Columbus Color Corps, then retired and active honorees and finally members of the Rolling Thunder Motorcycle Club.

The guest homilist. Msgr. Salvatore A. Criscuolo, a police and fire Chaplain in Washington DC., said the Mass was “to celebrate you and thank you as we know we can’t get along without you. You have an extremely difficult job as you are called upon every day to go out onto the streets to protect and to serve while continuing to live the oath you took at the academy on the day you were sworn in as a first responder.”

Msgr. Criscuolo said each first responder knows that not everyone always returns from their shift, making the ultimate sacrifice. He cited recent tragic instances of first responders who were killed in the line of duty including two New York Police Department officers who were gunned down when they were ambushed responding to a call for help; and three Baltimore City firefighters who died in a building collapse while fighting a fire to protect a neighborhood.

“We especially remember those men and women who have made the ultimate sacrifice,” the Monsignor continued. “We remember them not how they died but how they lived. We remember their courage, commitment, dedication and their calling given to them by God Himself. We also remember the families, the loved ones, the coworkers, the friends and the neighbors they left behind.” 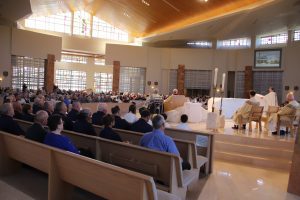 What first responders do daily is to stand in harm’s way in defense of human dignity, Msgr. Criscuolo concluded. “Do not despair. You are witnesses to the great hope that there is a better way. That’s who you are. You are that defense for each one of us, and are witnesses to hope, love and charity.”

Father Michael Orsi, Parochial Vicar at St. Agnes Parish as well as a police and fire Chaplain in Collier County, helped to spearhead the organization of the annual Blue Mass, and said he was humbled to be in the presence of so many who put their life on the line each day, committed to helping others.

A note of congratulation from District 28 State Senator Kathleen Passidomo was read at the conclusion of Mass. In addition, each active and retired first responder present was asked to come forward to receive a token of appreciation including a red, white or blue rosary made by a group of parishioners, and a St. Padre Pio token which read Hope, Pray, Don’t Worry, and was donated by the Robert L. Zore Fallen Officers Foundation.

Father Orsi was presented with several commemorative items including a U.S. Flag which was flown over the National 9/11 Memorial in New York City, as well as a Rolling Thunder motorcycle vest.

A barbeque, hosted by the Knights of Columbus, followed in the Parish Hall.