For the second time in as many months, the Venice Diocesan Council of Catholic Women (VDCCW) has started a new Council, this one in Naples.

On June 8, 2022, the new St. Ann Parish Council of Catholic Women in Naples was established. A slate of officers was installed during a ceremony presided over by Father William Davis, Oblate of St. Francis de Sales, and Pastor of the Parish. The installation followed a Mass and the praying of the Holy Rosary. The newly installed officers are Co-President Andrea Keefe, Co-President Shannon Radosti, Vice President Lisa McGowan, and Treasurer Joanne Irene.

After the installation, the ladies held their first formal meeting and were welcomed to the CCW family by Brenda Dolan, who is the Florida CCW President/Province Director-Elect. Dolan spoke about the CCW mission and sisterhood of the organization.

Later, Anne DeCamillo, President of St. William Parish Council, spoke about the history of Saint William CCW and its vibrancy serving as an inspiration to the women who ultimately formed the St. Ann Parish CCW.

As part of the kick-off of the new Council, they had their first service event with a “diaper drive.” A representative from Community Pregnancy Clinics Inc. spoke to the group that evening to talk about how CPCI is helping women and saving lives and accepted the donation of the collected diapers. CPCI has locations in Naples, Fort Myers, Sarasota and Gainesville, as well as mobile vans which serve in rural communities. 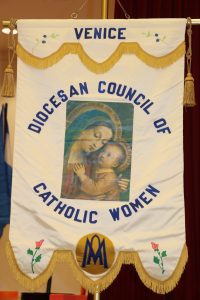 VDCCW President Josephine Weiss, who was also present to witness the birth of the new Council in Naples, said it is an exciting time for the VDCCW.

“We are proud of all the ladies in our Council of Catholic Women especially those who stepped up to serve in various positions on their boards,” Weiss said, adding another new Council is forming in Palmetto at Holy Cross Parish. The formal establishment of the Council is expected in the fall.

This good news follows the May reconstitution of the CCW at St. Catherine Parish in Sebring. The Council there had gone dormant for several years before reforming on May 7 with Father Jose Gonzalez, the Pastor, presiding.

Weiss confirmed that the VDCCW is going strong, with the new affiliates bringing the total to 18 VDCCW Councils in addition to a CCW Juniors program at St. Michael Parish in Wauchula. Meanwhile, new women are stepping into leadership positions, generously offering their talents to the running of Council activities.

For a group to become an affiliated VDCCW Parish Council, a petition must be submitted, and certain criteria must be met. Often, a Council is started when a group of women expresses interest in starting a Parish Council after learning about the VDCCW from others.

A Council forms with the support of the Parish Pastor/Administrator and is invited to participate in the numerous activities of the VDCCW and Parish Councils throughout the year.

Venice Diocesan Council of Catholic Women acts through its membership to support, empower and educate all Catholic women in spirituality, leadership and service. Council programs exude Gospel values and serve the needs of the Church and society in the modern world.

The VDCCW is a strong advocate of service in the community, volunteering their time, talent, and treasure to various efforts. There is special focus in supporting the Diocesan seminarians, the unborn and the homeless.

The U.S. CCW was founded in 1920 by the U.S. Bishops to provide all Catholic women a common voice and an instrument of unified action.