By Jean Gonzalez – of the Florida Catholic staff

Even though Myrlande Cola left her native Haiti 23 years ago, she still holds a fierce love for her country, especially Jan. 1, when she joins other community members to celebrate the independence of Haiti from France. 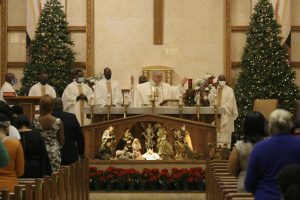 “This Mass is a big thing for me,” said the Immokalee resident who traveled to Bonita Springs to celebrate Mass with fellow emigrees of the Caribbean nation. “I took off work six months ago to be able to attend this. I cannot miss this Mass.”

Cola was speaking about the annual Mass held for the Haitian community in honor of both the Solemnity of Mary, Holy Mother of God and the 217th anniversary of Haiti being the first independent republic in the Caribbean. The annual Mass is hosted by the Diocese of Venice, in conjunction with the Haitian Catholic community, and was celebrated at St. Leo the Great Parish in Bonita Springs Jan. 1, 2021.

The event usually draws as many as 1,000 people from throughout the Diocese of Venice and includes a visit from a bishop or archbishop from Haiti. There are currently Masses celebrated in Creole at the following parishes: St. Charles Borromeo in Port Charlotte; St. Francis Xavier in Fort Myers; St. Michael in Wauchula; Sacred Heart in Bradenton; Our Lady of Guadalupe in Immokalee; and St. Peter the Apostle in Naples. The New Year’s Day celebration is one of the few times the entire community can gather in one place. 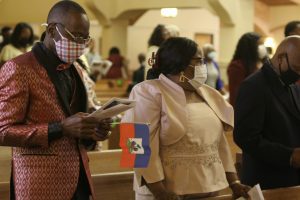 But precautions against the coronavirus meant a visiting prelate could not travel and buses could not be used to bring in Haitians from cities throughout the 10-county diocese. Yet, Father Jean-Marie Fritz Ligonde, director of Haitian Ministry for the Diocese of Venice and parochial vicar of St. Columbkille Parish in Fort Myers, said the community was blessed to still have the opportunity to celebrate the special day. As he does every year, Bishop Frank J. Dewane celebrated the Mass with Father Ligonde, and five other Haitian priests of the diocese. The precautions might have made the crowd gathered much smaller, but the spirit of the Mass was just as joyous and enthusiastic.

“We expected between 300 and 350 and are pleased with what we have,” Father Ligonde said. “(The community) says ‘thank you’ to Bishop Dewane for being with us every year. For sharing our meal, sharing our custom and sharing our tradition. And he kept the tradition even during the coronavirus, he decided to do it. It is to be praised and we are grateful to him.” 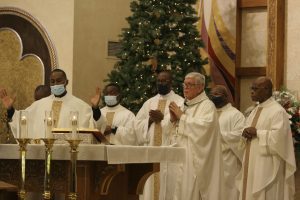 In his homily, Father Ligonde compared the Marian feast celebrated to Haiti’s Independence Day. The Solemnity of Mary, mother of God, is the first Marian feast, and Haiti is the first independent Black nation in the Western Hemisphere when the slaves there gained independence from France Jan. 1, 1804. Haitians should find strength in Mary’s example to go forward because Mary, even she suffered and exiled while carrying Jesus.

“Because Haiti is becoming poorer and poorer now, it is time that we engage ourselves to make the resolution to go forward. We have to put action into our words,” Father Ligonde said. “Our motto as Haitians is ‘L’Union fait la force’ — our strength is in our union. We must show strength to move forward and develop our country.”

Before closing the Mass, Bishop Dewane thanked the congregation for being present during this difficult time of living through the pandemic.

“I very much regret we couldn’t have a guest bishop for you. It is a long tradition, but I think you all understand,” he said. “It is my prayer that next year we will be full again. And we will have a bishop from Haiti who will be here. Let us keep one another united in prayer, for the well-being of all gathered here, and all who have been here in the past and could not meet this year. Thank you and a blessed and happy new year to all of you. Bòn ane.” 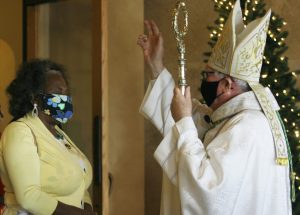 The Mass ended with the congregation waving Haitian flags and singing their country’s national anthem — “La Dessalinienne,” named in honor of Haiti’s revolutionary leader and first ruler Jean-Jacques Dessalines. It begins, “For the country, For the ancestors, Let us march. Let us march united.”

Traditionally following the Mass, the congregation gathers in the parish center to enjoy soup joumou, a rich pumpkin soup. Father Ligonde explained how the French would make the soup and never offer it to the slaves. So, after the independence of Haiti, it became a tradition to enjoy the soup as a symbol freedom and equality.

“On Jan. 2, we celebrate the feast of our ancestors, and we have a big meal with turkeys. But on Jan. 1, we have our soup jomou. It is a meal. It is so rich, we could eat it all day,” Father Ligonde said with a smile.

But that tradition also had to be modified because of the coronavirus. Instead of sitting to have soup, the community held a drive-thru where families could still receive celebratory food, but instead of eating together, would bring it home to their own families.