Father Alphonse Tri Vu, C.R.M., relieved of his duties as Parochial Vicar and Chaplain of Our Lady of Lavang Community at St. Martha Parish in Sarasota, effective December 19, 2021, and thus, has returned to his Religious Community.

Father Joseph Toan Duc Vu, C.R.M., as Parochial Vicar and Chaplain of Our Lady of Lavang Community, as well as hospital ministries, at St. Martha Parish in Sarasota, effective December 22, 2021. 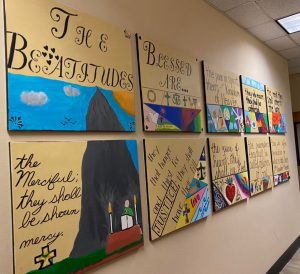 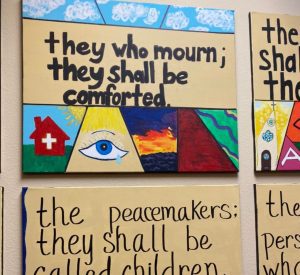 If you have a chance to stop by the St. Joseph Parish Center in Bradenton, you will notice a new mural hanging on the wall in the hallway leading from the gymnasium. It represents the Beatitudes and was created by both the high school and middle school youth groups. The mural includes 10 panels with elegant script of the words which are attributed to Jesus as recounted in the Sermon on the Mount. The panels also include various religious symbols that either represent the specific words of Christ on the panel or that of the Sacraments of the Church. The Parish maintenance team installed the mural the week of Jan. 3, 2022.The eighth-grade students at St. Martha Catholic School in Sarasota will soon be reading the book “Animal Farm” by Kurt Vonnegut. On Jan. 6, 2022, the students had the chance to build wind turbines using LEGO “Spike” to represent the windmill created by the animals in the novel. This is an example of how the school integrates many of its studies across different classrooms, using the STREAM (Science, Technology, Religion, Engineering, Art and Math) curriculum to present students a more well-round education that fosters increased creative thinkers while developing skills which will be useful later in life. 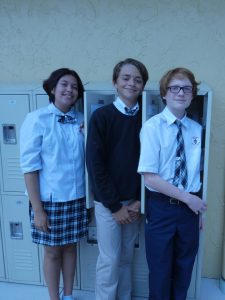 Lockers for students at St. Elizabeth Seton Catholic School in Naples made their debut when students returned from Christmas Break on Jan. 4, 2022. Those lockers are the first at the school and are courtesy of the Donahue Catholic Academy of Ave Maria. The Academy replaced some of their school lockers with larger ones in the fall. The used lockers were then donated to the Naples school and were only recently installed. 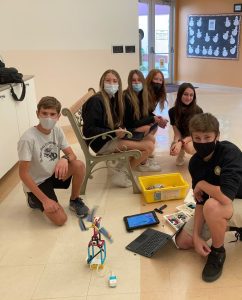 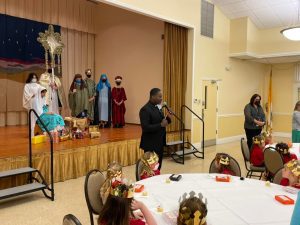 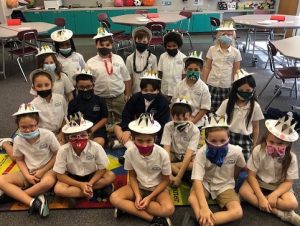 The Feast of the Epiphany, Jan. 6, 2022, is the manifestation of Jesus as Messiah, Son of God and Savior of the world. The great Feast of the Epiphany celebrates the adoration of Jesus by the wise men from the East and was celebrated at different Diocesan Catholic Schools. Epiphany Cathedral Catholic School in Venice, the eighth graders led a procession and brief play retelling the story for the entire student body. At St. Andrew Catholic School in Cape Coral, the Feast Day, was taught in second grade Spanish class, where students learned about how traditions are celebrated differently in Spain and Latin America. Both schools held celebrations which included food and the wearing of crowns.

Student get lesson in mosquitoes 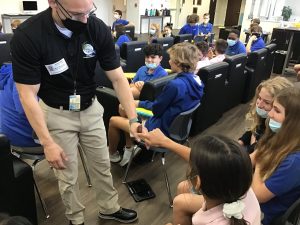 St. Francis Xavier Catholic School seventh graders were visited on Jan. 10, 2022, by a representative of Lee County Mosquito Control who brought samples of the different bugs and types of mosquitoes found throughout the area and explained how some bugs are good for the environment while others can carry disease. Further, it was explained what the county does to control the mosquito population, including spraying, and what each student can do on a daily basis to help keep the mosquito population under control.