A group of students from St. John Neumann Catholic High School in Naples put their classroom lessons to work when they participated in a weeklong Immokalee Service Retreat. 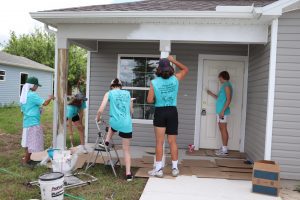 The group travelled about 40 minutes from their school to Immokalee, a short physical distance but the retreat was a long spiritual journey that surprised many in how deeply it impacted them.

Each of the 18 students, incoming-juniors and incoming-seniors, learned about the Collier County community that is home to many farms and food processing facilities and is also one of the poorest in the country.

Throughout the week of May 31-June 3, the students spent each day assisting at different outreach facilities, including Guadalupe Social Services of Catholic Charities, Habitat for Humanity and others. 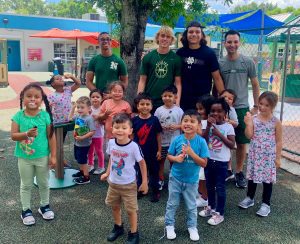 The service trip was organized and led by Sisters April Hoffman and April Cabaccang, Salesian Sisters of St. John Bosco, both of whom are on the faculty at St. John Neumann. To start the week, they prayed each student would gain a renewed sense of Christian Service from their experience. The theme for the week was based on a Gospel quote from 1 Peter 4:10 – “Each of you should use that gift you have to serve others.”

The enthusiasm of the students to put their Catholic Social Teaching to work was reflected in the effort and care they put into each task they were assigned.

When the week began, the students did not expect the retreat to have the deep emotional impact it had on them as most had never been to Immokalee or even heard of the plight of the people there. 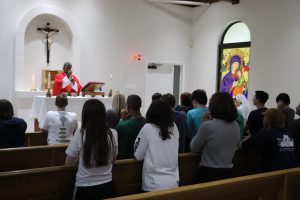 Some admitted to participating in the retreat to earn service hours or because a friend was participating. But then, something changed. As the week progressed, the teens began to grow as Christians, shining the light of Christ in the community while also finding the face of the Lord in all whom they encountered.

Several expressed a greater appreciation for the gifts and opportunities they have in their everyday life and a desire to carry the lesson of service beyond the one week. St. John Neumann has several clubs which do service projects, many benefitting the programs of the poor in both Naples and Immokalee. 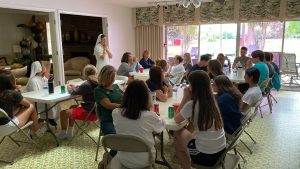 Each day included evening Mass celebrated at Our Lady of Guadalupe Parish by Father Inna (Ignatius) Reddy Yeruva, Missionary of Compassion, who works with Catholic Charities.

“God is granting you enlightenment,” Father Yeruva said of the retreat. “You are getting to see a world beyond St. John Neumann and your own homes. This is a gift you must embrace.”

The retreat also included daily prayer and reflection while staying at the Bethel Retreat Center. In addition, the evenings included games and guest speakers who offered words of encouragement. The first guest speaker was a Neumann alum who was on the same retreat several years earlier and shared how it had had a lasting impact on his life.

For example, when some of the students were assigned to count beans at the Casa Maria Soup Kitchen of Catholic Charities, the task seemed pointless, but the youth quickly learned that it was important to sort through the beans to ensure proper portion sizes and their helping lessened the work of the only paid employee of the Soup Kitchen.

Other students helped Pathways Early Childhood Center and learned that the lunch the children receive each day is likely the only food they will have access to all day. Then, while helping to paint and clean homes at a Habitat for Humanity project, the students met a future resident who expressed eternal gratitude for their work.

Sister April Hoffman said the week is much more than service hours earned and being with friends. “It is about developing a desire to serve others and that when we serve, we are serving Jesus in the people we encounter.”