A global pandemic could not diminish the memories of Sept. 11, 2001, when terrorists struck in New York, Washington, D.C., and Pennsylvania, leaving behind thousands of dead while showing the world the face of true heroism. 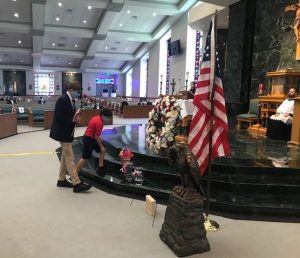 The 19th Anniversary of the 2001 terror attacks was marked throughout the Diocese of Venice at Parishes and Catholic schools. Toned-down a bit because of the pandemic, the commemorations still had powerful meaning for those who participated.

An annual 9/11 Memorial Mass took place at St. Peter the Apostle Parish in Naples, where retired New York Police and Fire Department members participated at the home of the 9/11 Cross, a cross rendered out of the steel of the collapsed South Tower of the destroyed World Trade Center.

Father Gerard Critch, Pastor of St. Peter the Apostle, worked at Ground Zero for several weeks following the terror attacks and spoke about the vivid memories and scars people carry from that day, both externally and internally. 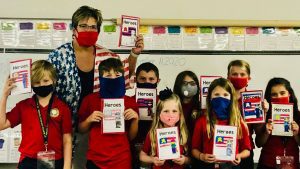 At St. Martha Catholic School in Sarasota, third graders in Christina Via-Reque’s class learned about and honored the memory of September 11th with several different activities. One included reading Heroes mini-book which focuses on specific heroes, such as police, firefighters, doctors and nurses, military, teachers and more. The students also created an Agamograph, which is a colored foldable art piece that looks different when you look at it at different angles. The message on one side was “9-11” and the other side read “We Remember.”

“The kids were totally engaged all day and loved learning about 9/11 and seeing how America came together to help one another during such a tragic time,” Via-Reque said. “They had many questions that led to long discussions about what it means to be a Hero in our society and that even they themselves can be Heroes in their communities.” 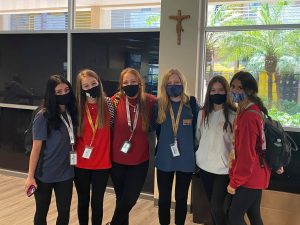 Students at Bishop Verot Catholic High School in Fort Myers were invited to dress in red, white, and blue, in observance of Patriot Day, a national day of service and remembrance. This annual tradition serves to remind students about the significance of the day, as none of the students were born in 2001, and the wearing of different clothes than the school uniform also serves as a fundraiser. Combined, the students raised more than $2,000 in support of the Tunnel to Towers Foundation, which provides a mortgage free home to families of fallen soldiers and first responders with small children.

A 9/11 Tribute ceremony took place following Mass for students at St. Elizabeth Seton Catholic School in Naples. Led by grades 5-8, the Tribute honored and remembered those who lost their lives on that fateful day while also recognizing the ongoing efforts of local first responders to keep everyone safe. During the ceremony, students placed several items beside a red, white and blue wreath, including scrolls printed with the names of 9-11 victims; roses; and flags. The school also dedicated an inscribed brick to be placed at the Collier County Freedom Memorial located on Golden Gate Parkway. Present for the ceremony were several local dignitaries and first responders.

These were just a sample of the many commemorations which took place across the Diocese.