The Stations of the Cross, also known as the Way of the Cross or Via Crucis, commemorate Jesus’s passion and death on the cross. There are 14 stations that each depict a moment on his journey to Calvary, usually through sacred art, prayers, and reflections. 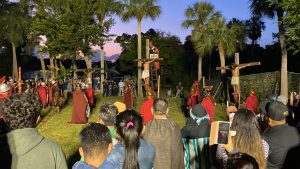 The practice began as pious pilgrims traced the Lord’s path through Jerusalem on the Via Dolorosa. As many wanted to pass along the same route as Jesus, but could not make the journey to Jerusalem, a practice developed that eventually took the form of the 14 stations currently found in almost every church throughout the world. 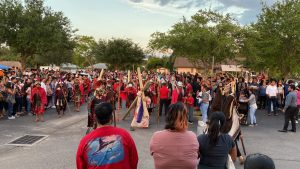 This devotional prayer is recited throughout the year and tends to concentrate on the Fridays during the Lenten Season. The Stations can also be done in the form of a reenactment, or Living Stations, on Good Friday. Pope Francis took part in the annual Living Stations of the Cross at the Roman Colosseum on Good Friday, April 15, 2022. The devotion allows the Faithful to make a spiritual pilgrimage and meditate on the Passion of Christ. 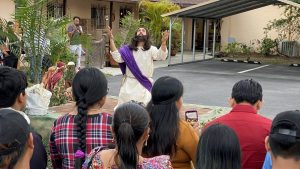 For the Faithful at Jesus the Worker Parish in Fort Myers, the annual Living Stations is something this Hispanic community takes seriously. In the parking lot and field behind the Parish Hall, stages were erected, and a reenactment of the Stations took place, complete with Jesus crowned with thorns, as well as dozens of actors dressed in centurion garb or playing key figures in the retelling of the Passion. Upwards of a thousand Faithful first watched the opening scenes before following the 14-step procession as it wound its way through the Parish parking lot, stopping along the way to relive the suffering Christ endured with a narrator recounting the Gospel readings.

The reenactment of the Lord’s Passion at Jesus the Worker included: the Last Supper, the betrayal of Christ at the Garden of Gethsemane by Judas; Christ’s appearance before Annas, the father-in-law of Caiaphas, who was high priest that year; His appearance before Caiaphas; ending before Pontius Pilate in the praetorium. Next came the scourging before His sentencing to death. 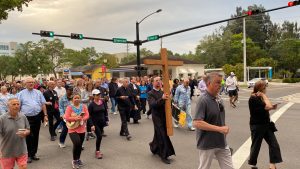 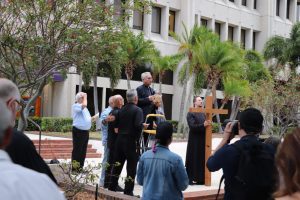 Earlier in the day, priests and deacons from numerous Parishes in Sarasota and Manatee counties took part in the Sarasota Ministerial Association’s-sponsored Stations of the Cross along Main Street in downtown Sarasota. Nearly 1,000, representing numerous Christian denominations, took part in this event which returned after a two-year absence because of the pandemic. 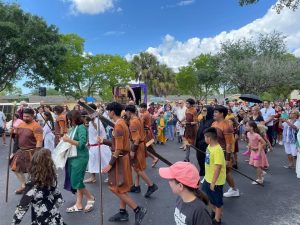 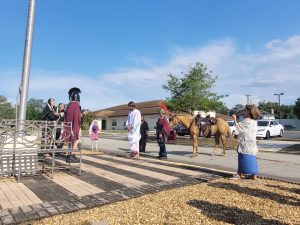 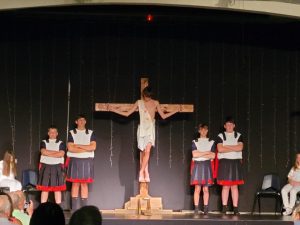 The Stations of the Cross took place on Good Friday at many Parishes throughout the Diocese, whether it was inside a Parish Church or outside. In addition, many schools host their own Passion plays as an educational tool for students of all ages.