To put it simply, Hurricane Ian was a monster. The true scope is still unknown more than a week after landfall.

Following the passage of Hurricane Ian, people emerged from their homes to find the world turned upside-down. The spectrum of damage to the communities within the Diocese of Venice ranges from obliterated homes, floods and piles of yard debris and every impact in between.

Below are a few stories of the hurricane from around the Diocese:

Father Patrick O’Connor, Oblate of St. Francis de Sales and Pastor of Jesus the Worker Parish in Fort Myers, decided to ride out the storm inside the Parish church with Parochial Vicar Father Jose del Olmo. This was safe a bet because the new church was completed in 2011 to the highest standards. The area around the church is a very poor migrant community with many manufactured homes or houses built in the 1950s. Because many sought safety in the church when Hurricane Irma approached in 2017, Father O’Connor posted on all the doors of the church and Parish offices a list of nearby shelters. When the storm began most went to shelters, but when it got worse, the church was the safest place. 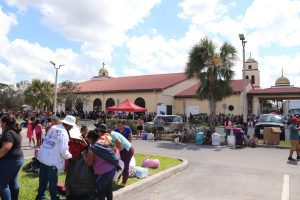 “It was crazy!” Father O’Connor explained. “Lots of families… We could not even open most of the doors because of the wind.” Everyone was safe as the church came through unscathed. However, the Parish Hall lost roof tiles, and San Jose Mission in South Fort Myers, which is administered by Jesus the Worker, was inundated with flood waters. In the days after the storm passed, volunteers cleaned out the Mission church and hall as best they could. Since then, the Parish has a been abuzz with activity of relief efforts to help the community with needed emergency supplies with the assistance of several organizations, including Catholic Charities, Diocese of Venice, Inc.

Time for a barbecue 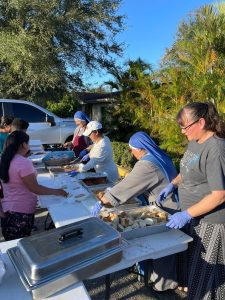 Nestled due east of Bradenton, St. Michael Parish in Wauchula sits in Hardee County, a rural community that prides itself on independence and resilience in times of adversity. Hurricane Ian has been the toughest challenge so far, but the spirit of the people remains strong as many families recover from the double hit of wind damage followed soon after by massive river flooding which caused hundreds to lose their homes to the Peace River. The Parish has a robust food pantry which is operated by a dedicated group of volunteers and the religious sisters who serve the community, Servant Sisters of the Virgin of Matara. With power out, it became clear that the food in the freezers would not last. So, a barbecue was planned for the night after the storm on Sept. 29. This was such a huge success; hot meals have been served each night since. Families emptied their own refrigerators and freezers before the food spoiled so the food was plentiful. Despite not having electricity, parish volunteers utilized a propane-powered stove and oven, outdoor grills and battery-powered lanterns to cook a hot meal each day following the hurricane. Outside large pots of pasta boiled while lasagna cooked in the kitchen of the Parish Hall. Since the storm, about 420 hot meals have been served each night. During the day, as more and more relief supplies arrive, distributions are taking place helping people get through each day.

Big truck, no forklifts, no problem

When three semitrailers full of supplies arrived at St. Katharine Drexel parish in Cape Coral on Tuesday, Sept. 4, and no forklifts were to be seen, a call went out for help. And help arrived in the form of dozens of volunteers, including many from the Parish Youth Outreach. These teens stepped up to help. The Cape Coral region experienced extreme damage and flooding and, even a week later, less than 20 percent of the city had power and few had drinkable water. The supplies being unloaded were desperately needed, even by some of the teens helping. Pastor Father Ricky Varner praised the youth for assisting in the difficult conditions. 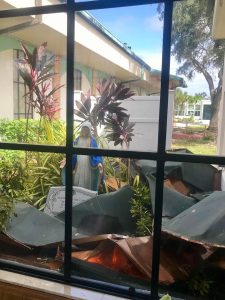 Some of the worst damage in the northern portions of the Diocese was to the roof of Incarnation Parish Church. Large chunks of copper roofing peeled off and were scattered everywhere. Some landed in the parking lot, others into carefully manicured gardens. One large piece that flew off the church building landed in a prayer garden where a statue of the Blessed Virgin Mary stands and can be seen through a window as the faithful enter church. A post on social media from the Parish read: “Several large pieces fell here surrounding our Blessed Mother statue, but thankfully causing no harm!”

St. Vincent de Paul Society in Naples delivered Meals on Wheels amid Hurricane Ian’s destruction. Thanks to volunteers and staff, the Society was able to deliver shelf stable food to those who rely on Meals on Wheels for their daily meals. The Society posted to social media a day after Ian passed, “The destruction that was seen while delivering was truly heartbreaking.”

As the hurricane blew through Sarasota, the storm created a new skylight for Bishop Frank J. Dewane. Two large branches from an oak tree pierced the ceiling of his living room, causing damage and water to intrude. “I have two trees in my home, but I didn’t plant them,” Bishop Dewane said when explaining the damage to parishioners at Incarnation Parish in Sarasota on Oct. 1. The Bishop said he feels blessed to be alive after such a close encounter with an oak tree. “My issues are nothing compared to others who are going through a much greater loss. Roofs can be repaired. If not, I will decorate them for Christmas. The true focus now is on repairing the lives of those who are suffering in our Diocese.”

Check back in the next issue of The Florida Catholic for more stories of hope in the aftermath of Hurricane Ian.