The new Pulte Family Life Center at St. John the Evangelist Parish in Naples was dedicated and blessed by Bishop Frank J. Dewane on March 16. 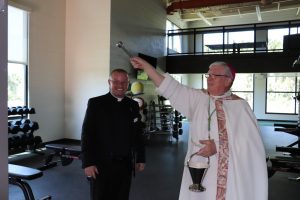 The building is dedicated to the memory of Bill Pulte, a builder of homes who passed away in 2018. Representatives of the Pulte family were present for the ceremony and led the ribbon-cutting.

Bob Pulte, Bill’s son, said the legacy left behind by the Family Life Center is something the Parish community will use and enjoy for years to come. “Please know what this place and this community meant to my father,” Bob Pulte said.

Bishop Dewane described the Pulte Family Life Center as a place where all will come to know the presence of Christ, to experience friendship and joy, and to grow in Christ’s love.

The Center is 29,277 square-feet and encompasses a café, two fitness rooms, a gym with courts for basketball, volleyball and more, as well as a community room that can be subdivided. In addition, there are offices and maintenance areas. There is also a playground and two bocce ball courts. The front lobby has a large cross and a quote from St. Ignatius of Loyola: “Teach us to give and not count the cost.” The facility was designed by Studio+ Architects and the construction done by Gates Construction.

This new space is home to the growing Catholic Youth Organization – which focuses on engaging younger parishioners; and the new Catholic Adult Organization which is a set of programs to enrich and engage every age of adult, from 18 to 118, in body, mind, soul, and spirit.

Following the blessing, the Bishop celebrated the Mass in the gym, which is serving as a temporary overflow worship space while hurricane repairs on the Parish Church continue. 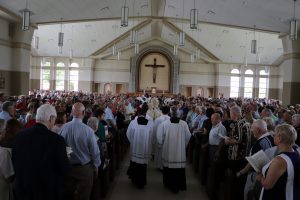 Richard and Monica Rice have been going to Our Lady of the Angels Parish in Lakewood Ranch since Mass was held in a nearby Lutheran Church where just a few dozen people initially attended.

Those days are long in the past as the Parish now has 5,133 individuals and 1,946 families. To accommodate the growth, a new 21,060-square-foot Parish Church was built and on April 22 Bishop Frank J. Dewane dedicated and blessed the people and the building, proclaiming it to be a sacred space from this day forward.

The Rice’s, and many others, were impressed by the Dedication Mass itself which has many parts that are unique and rich with tradition. “It was beautiful,” Monica Rice said. “It was really emotional at times. To have the Bishop come here for this was a special blessing. It is truly wonderful for the whole Parish Community.” 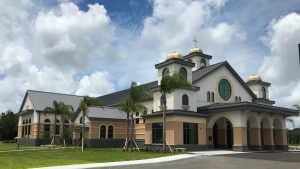 Bishop Dewane explained that a Church dedication and blessing has many parts the purpose of which is to solely and permanently dedicate the building as a sacred space. However, the more important part of a Church is the people who worship there. “I have a distinct advantage point to see the true beauty of this church today,” the Bishop said from the altar. “I don’t have to look up, but it’s right in front of me. It’s here. It’s all of you.”

The Bishop also noted that several hundred people were watching the Mass from the former church. “You simply outgrew it. And that’s a good thing!”

At the conclusion of the dedication and blessing, Parish Administrator Father Scheip, who has been at the Parish since early 2017, proclaimed: “Bishop we made it!” Father thanked the many people who were involved in the vision and contributions necessary in making the new Church possible. He also made a special point of joy to note that the Mass was the first time the parish had kneelers and everyone knelt.

“This is just the beginning. This is all for you. Priests come and go. Bishops come and go. But the people of God remain faithful and steadfast,” Father Scheip said.

The memory of previous Administrator Father Dan Smith, who died in 2016, was present throughout, as major aspects of the design of the Church were part of his vision. In addition, the chalice used during the consecration was Father Smith’s personal chalice.

The Dedication of a Church was done as part of a Mass and began with a procession from the former church to the new building of concelebrating priests, escorted by the Color Corps of the Knights of Columbus. Gathering outside of the Church, the Rite began with prayer and a hymn. Parish representatives then presented the Bishop with a certificate of dedication, copies of the architectural plans, and a ceremonial key. 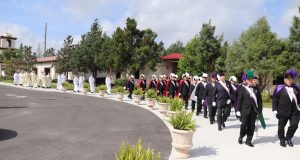 The Bishop then said: “Go within His gates giving thanks, enter His courts with songs of praise.” The opening procession then began. Once inside, the next part of the Rite included the Bishop blessing the water in the Baptismal Font and then he, along with Father Scheip and Parochial Vicar John Haong, blessed the people with Holy Water as they are the spiritual temple of the Lord and so as to recall their Baptismal promises and repentance. This was followed by the sprinkling of the walls of the Church, marking the Church as a holy place from that day forward — before finally blessing the altar and the sanctuary.

The Mass then proceeded with some minor adjustments, such as the Litany of Saints replacing the general intercessions. Following the Litany, the rites of anointing, incensing, covering and lighting the altar followed. During the anointing, Bishop Dewane spread Sacred Chrism Oil – blessed at the Chrism Mass during Holy Week – first on the altar and then in the sign of the cross at four points on the walls of the Church. This is done to provide a sacred designation for the altar and Church. Next was the incensation of the altar to signify Christ’s sacrifice, and then of the nave of the Church and of the people throughout symbolizing “prayers rising up to the Lord.” 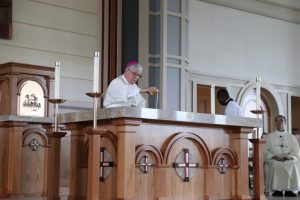 The new Church has a seating capacity for 1,074 people, doubling the seating capacity from the previous worship space, where weekly Masses have been held. The cruciform design comprises a hybrid pre-engineered steel building frame with a steel roof, and concrete masonry structural walls with cementitious stucco finish system and aluminum window systems.

The exterior design style borrows from Italian Renaissance and Spanish Mission Revival archetypes. There are prominent gold domed towers and central gold domed cupola with a cross frame central entrance gable. Both an interior and exterior focal point is a 11-foot 4-inch diameter rose window of Our Lady of the Angels, the patroness of the Parish, the beauty of which drew a great deal praise. It is located above a triple arched entrance canopy. Another lovely element is an oculus between the narthex and the nave which offer views of the rose window at the exterior wall. The church design features 68 exterior windows, which will soon display colorful stained glass. 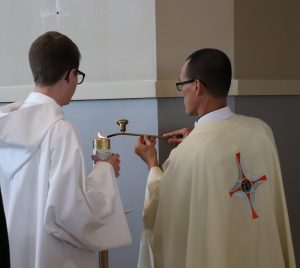 Located on the west side of the Church, there is a Daily Mass Chapel, which will seat an additional 194 people. To preserve the history of Parish, all the Sanctuary items from the now Parish Hall, which has previously served as the worship space, will be placed in the Daily Mass Chapel, including the altar, tabernacle, cross, presider and assistant chairs, along with statue of Our Blessed Mother, as well as 18 of the stained-glass panels. On the south side of the Church is Adoration Chapel which will accommodate 30. The multipurpose building used as the church will now become the Parish Hall and undergo future renovations to include the installation of a new kitchen.

All construction was respectful of the natural habitat of the eagle’s nest, which made its home on Church property several years ago. There is a permanent 100’ protection zone around the nest, which was in place during construction of the new Church and required monitoring and certain restrictions to construction times.

McIntyre, Elwell & Strammer, of Sarasota, is the contractor, George F. Young, Inc., of Lakewood Ranch, is the civil engineer. The architect is parishioner John J. Holz of Plunket Rayisch Architects, LLP, of Sarasota.

Our Lady of the Angels Parish was first established in 1999 as a Mission Church of Our Lady Queen of Martyrs Parish was led by Third Order Regular Franciscan priests sharing worship space with a nearby Lutheran Church. The original church was opened in 2003 and has more than doubled the number of registered families in the past 10 years.

Ray and Robbie Phaneuf have been parishioners for four years and are impressed with the new Church, pleased that the hard work has paid off. “What a special day,” Ray said. “This has been a long time coming. With so many people moving to the area, we were crammed into the old church,” Robbie said. “Now we have a big open space to worship. Just perfect.”

Two of the newest parishioners, Julia Barreda and Kellen Braren, parishioners for just a few months, are excited to see the new Church. The couple is engaged to be married next February and Julia even remarked that the new Church is so beautiful that little will need to be done for the wedding. “It is already so wonderful. I don’t know if I would change anything.”