The atmosphere was charged with excitement as the Bishop Verot Catholic High School Viking Football Team kicked off its season on Sept. 4, 2020 at home in Fort Myers. 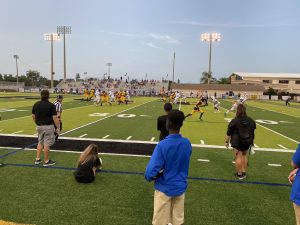 The crowd roared as the players run through a tunnel and onto the field for the first time, flanked by cheerleaders and looking eager and excited to play after an off season which had many wondering whether football would happen.

“I can’t believe this day has finally come,” one player shouted as he hopped up and down with excitement on the sideline as he prepared to play Tampa Jesuit. “Incredible.”

With stadium capacity limited to less than 25 percent, the crowd was not as rowdy as usual, but players, coaches and fans didn’t seem to mind and really appreciated the sense of doing something normal – enjoying Friday night football.

Parents in the stands were easily heard giving advice to players, coaches and referees alike. One parent noted that she was so happy the Bishop Verot staff was able to get the season started. “These boys worked so hard all summer and it almost seemed as if games would not happen, but here we are. I can’t say enough how well everyone communicated and prepared to be safe. I just hope for the next game there are more fans in the stadium. The boys love the big crowds.” 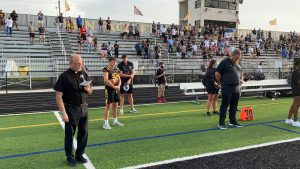 Temperatures were taken of everyone entering, all of whom needed a pre-distributed ticket. This was accomplished as each player, cheerleader and band member was given three tickets to the game. The only other students present were those who received tickets.

Masks were required when moving about the stadium, but fans could take them off while seated. The home side of the stadium was divided into sections and every other row was empty all to ensure social distancing. It is unclear when students will be allowed to attend the games as Athletic Director Jason Baumgardner explained that the situation will be reevaluated before each home game.

The opening prayer was given by Father John Belmonte, SJ, Diocese Superintendent of Catholic Education.

Those present saw a battle between the two schools that ended in a disappointing 28-21 loss for Verot. Senior wide receiver Malik Curtis wowed the crowd with blazing speed and dazzling plays and nine receptions for 226 yards and three touchdowns. Verot was down 22-0 early but fought hard to make it 22-13 at halftime. The battle continued with Verot coming up short on its final attempts to get in the end zone.