Venice – Transitional Deacon Carlos Encinas had only to complete his final exams in medical school when he realized his desire to become a priest was something he could no longer ignore. 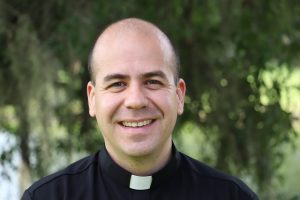 He left his hometown in Argentina and went to New York City, ostensibly to visit a friend, but actually to seriously discern a vocation to the priesthood. “I needed to separate myself from medical school and home, a place I lived my entire life. I wanted to focus on this process with my whole heart.”

While in New York City, Deacon Encinas discerned with the Franciscan Friars, helping in a homeless shelter. While this experience helped him to realize he was on the right path, he did know that religious life was not a good fit because he wanted to be a parish priest. Thus, he began his formal studies toward the priesthood for the Archdiocese of New York at Cathedral Seminary House of Formation in Douglaston. N.Y., where he graduated with a degree in philosophy.

It was just before his final year in college seminary when Deacon Encinas decided he wanted to serve in a Diocese which had distinct Hispanic populations, unlike New York City where the population is more diffuse. A friend suggested he look at the Diocese of Venice. A week-long visit, including a meeting with Bishop Frank J. Dewane, solidified his decision to join the Diocese as a seminarian upon graduation in 2014. 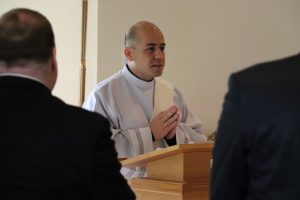 Throughout his entire discernment process, Deacon Encinas said God was always gentle in asking more of him, showing him signs that he is on the right path. “God never forces you to do something you don’t want to,” he added. “It was at Mass that I would see signs that led me to realize what God wanted from me.”

The recent graduate of St. Vincent de Paul Regional Seminary in Boynton Beach is now on the cusp of reaching his goal of becoming a priest. The Ordination to the Priesthood of Deacon Encinas will take place at 11 a.m., Oct. 5 at Epiphany Cathedral, 350 Tampa Ave. W., Venice. Bishop Dewane will preside over the ordination.

Now 40, Deacon Encinas was born and raised in Corrientes, Argentina, and said he had a desire to become a priest off and on since he was 19-years-old. When he decided to enter seminary in the U.S., his parents, Alberto and Josefina Encinas, were skeptical, and his father was upset because he wanted his son to become a physician.

“As time passed, he appreciated more what I was doing and now everyone is very happy,” Deacon Encinas explained.

Because of the distance and cost, none of his family was able to attend his April 14, 2018, ordination to the transitional diaconate at St. Joan of Arc Parish Church, Boca Raton. The family did watch via a livestream on social media. He is pleased to know that in October, his parents, sisters, a niece and nephew and three cousins are all coming to the U.S. for the ordination.

The ordination of a transitional deacon to the priesthood is considered one of the pivotal moments in the life of a Diocese. It is one of the most beautiful and often unseen Sacraments in the Church. It is a public response to the Call to Holiness, which comes with great responsibility and accountability.

While an ordination is the final step to priesthood, it is not the conclusion of priestly formation, it is just the beginning.

During ordination to the priesthood Deacon Encinas will freely presents himself to serve God, the Church and the Bishop of the Diocese of Venice and his successors. He will also make a renewed commitment to celibacy and promise obedience. The reward for that choice is to have his life filled with the message of God.