Noah Kumar is captain of the Cardinal Mooney Catholic High School Golf Team in Sarasota and has now cracked the top 100 nationally and is ranked 90th with Junior Golf Scoreboard. The Florida High School Athletic Association ranks Kumar the No. 1 high school golfer in the State of Florida. During his senior season with Cardinal Mooney, Kumar has an 18-hole tournament stroke average of 67.33, with six straight low round first place medal wins in a row. His nine-hole stroke average is 35.5 with a career low of 31. Kumar has been playing tournament golf since he was 10-years-old. He qualified to play in the U.S. Junior Amateur this past July and came in 12th in stroke play. Keep up the good work Noah! 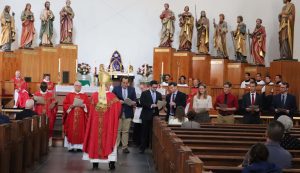 Bishop Frank J. Dewane celebrated a Mass for the faculty and student of Ave Maria University in Ave Maria on Sept. 23, delayed from Sept. 2 when the Mass was cancelled because of Hurricane Dorian. During the mass the Bishop encouraged the students to grow in their faith and to carry the message of the Lord into the world. At the conclusion of the Mass, the Bishop presided over a commissioning ceremony for nine new theology professors, during which each took an oath and vowed to remain faithful to the teachings of the Church. 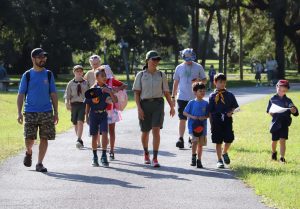 Scouts from across the Diocese of Venice gathered Sept. 21 for a 10 Commandments Hike at Our Lady of Perpetual Help Retreat Center in Venice. The more than 100 Boy Scouts, Cub Scouts, Girl Scouts and American Heritage Girls learned about the 10 Commandments at different stations located along the internal road of the property. The Scouts were presented with an achievement badge for participation at the end of the day. 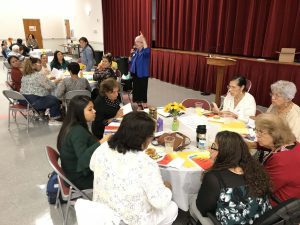 The Council of Catholic Women of the Eastern Deanery took part in a bi-lingual retreat Sept. 21 at Our Lady of Grace Parish in Avon Park. More than 70 women from parishes Hardee, Highlands, Hardee, Glades and Hendry counties took part. The retreat included presentations by a number of priests as well as group prayers with the praying of the rosary and the Divine Mercy Chaplet. 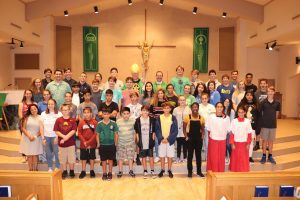 A National Evangelization Team (NET) Ministries group held a one-day retreat for middle school students on Sept. 29 at St. Joseph Parish in Bradenton. The retreat included several talks by youth ministers who travel across the nation trying to inspire young people to open themselves up to the Lord. Bishop Frank J. Dewane celebrated the Mass for the retreatants and offered words of encouragement to the middle-schoolers for participating in the day and to the NET team for coming to the Diocese. 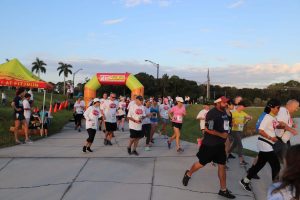 The Our Lady of Victory Knights of Columbus Council 3358 welcomed more than 200 to the 2nd Annual Sarasota Laps for Life at Nathan Benderson Park in Sarasota. The event was opened by a blessing for Deacon William Ladroga and the runners and walkers followed a path for three laps to complete the 5K event. The top finishes finished in 17:35 minutes. The event helped to raise money to purchase for a new ultrasound for My Choice Pregnancy Center in Sarasota. 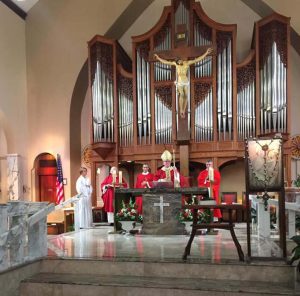 Bishop Frank J. Dewane celebrated the annual Red Mass on Oct. 2 at St. Martha Parish in Sarasota. The Mass is held in honor of all members of the legal profession and has a history which dates back centuries. The most famous such Mass is held for the U.S. Supreme Court on the first Sunday in October. The Florida Bishops also celebrate a Red Mass for lawmakers in Tallahassee during the annual legislative session.

Pets great and small were blessed Oct. 4 on the Feast Day of St. Francis of Assisi at Incarnation Catholic School in Sarasota. Administrator Father Eric Scanlan blessed everything from hermit crabs, ferrets, fish, birds, snakes, lizards, dogs and cats brought in by the students and parishioners.