If anything is predictable in Florida it is that each summer the weather will be very warm and humid, and everyone should be keeping an eye on the tropics and preparing for Hurricane Season. 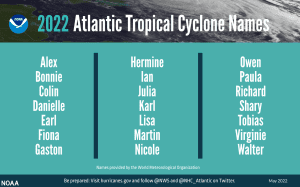 One only has to see how Hurricane Agatha, a storm that formed in the Pacific Ocean, slammed the Mexican coastline during Memorial Day Weekend before crossing and heading into the Gulf of Mexico just in time for the official opening of the 2022 Atlantic Hurricane Season.

The suddenness of the formation is a reminder that these destructive storms can form nearly anywhere and at any time between June 1 and November 30, the official close of the Atlantic Hurricane Season.

While early storms do not necessarily promise this year will be worse than any other season, experts stress it only takes one storm to strike your home to make it a bad season.

Factors such as warm surface water in the Atlantic and the Caribbean Sea, along with weak tropical trade winds and a strong West African monsoon, point to another busy year for hurricanes, which typically peak in August and September. 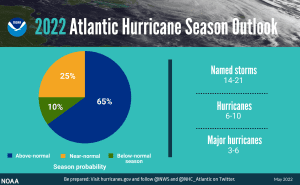 “As we reflect on another potentially busy hurricane season, past storms — such as Superstorm Sandy, which devastated the New York metro area ten years ago — remind us that the impact of one storm can be felt for years,” said NOAA Administrator Rick Spinrad, Ph.D.

The Diocese of Venice is no stranger to these storms, with Hurricane Irma in 2017 leaving behind a trail of destruction and despair in its wake; a year later we saw Hurricane Michael devastate the Florida Panhandle. Several other close calls and direct hits are part of the history of the region with Hurricane Donna (1960), Hurricane Andrew (1992), and Hurricane Charley (2004).

To best prepare for a storm, having an emergency plan is crucial. Simple things people need to know or do:

To help Floridians gather supplies ahead of time, the 2022 Disaster Preparedness Sales Tax Holiday runs from now through June 10.  This tax holiday allows for the purchase of essentials from batteries and flashlights to generators all tax free. Newly eligible items in 2022 include pet food and supplies as well as smoke detectors, fire extinguishers and carbon-monoxide detectors. For a complete list of eligible items, please visit https://floridarevenue.com/disasterprep.

For those who may need help in evacuating, such as the elderly or handicapped, they must contact their county emergency management office to register for evacuation assistance. These systems are updated each year, therefore registering in the past will not guarantee being on a list for 2022.

Should disaster strike, Catholic Charities, Diocese of Venice, Inc. will be at the forefront in preparing and responding. Catholic Charities will send a team to the epicenter of the disaster and then coordinate to set up relief centers — called PODs, which stands for Points-Of-Distribution – where the need is greatest. These centers – often located at Parishes or next to Catholic Charities offices – will be sites where water, clothing, food and other disaster relief assistance can be distributed.

The Diocese of Venice is well versed in responding to these storms. Each Parish, Catholic school and other entities have hurricane preparedness plans which assists in preparation before a storm and recovery afterwards.

Taking a few steps now can prevent panic and confusion if a storm were to threaten the area while following directions from your local emergency management officials. To track and learn more about hurricanes, www.nhc.noaa.gov/.

As we enter the 2020 Atlantic Hurricane Season (June 1-Nov. 30), a prayer is presented here by which one asks God for protection and safety from the storms that often threaten Southwest Florida. With the formation of Tropical Storm Arthur in mid-May, it promises to be another busy season of watching the tropics. We must all remember the devastating effect of Hurricane Irma from 2017 and what was witnessed when Hurricane Michael struck the Florida Panhandle in 2018. Everyone in the Diocese of Venice knows and understands the power of these storms and the suffering which follows in their wake.

Prayer for Safety in Hurricane Season

O God, Master of this passing world, hear the humble voices of your children. The Sea of Galilee obeyed Your order and returned to its former quietude. You are still the Master of land and sea.

We live in the shadow of a danger over which we have no control: the Gulf, like a provoked and angry giant, can awake from its seeming lethargy, overstep its conventional boundaries, invade our land, and spread chaos and disaster. During this hurricane season we turn to You, O loving Father.

Spare us from past tragedies whose memories are still so vivid and whose wounds seem to refuse to heal with passing of time. O Virgin, Star of the Sea, Our beloved Mother, we ask you to plead with your Son on our behalf, so that spared from the calamities common to this area and animated with a true spirit of gratitude, we will walk in the footsteps of your Divine Son to reach the heavenly Jerusalem, where a stormless eternity awaits us. Amen.