Father Thomas J. Gillespie, Oblate of St. Francis de Sales for 68 years and former Parochial Vicar of St. Ann Parish in Naples, died July 27, 2019, at the Oblate community at Childs, Md. He was 87. 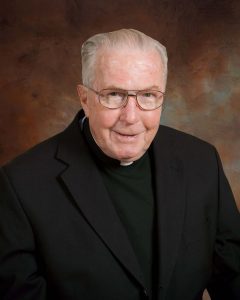 Father Gillespie was born Jan. 16, 1932, in Elkins Park, Pa., the son of Francis J. Gillespie and Catherine (McMaster) Gillespie. It was in 1950, when he entered the Oblates of St. Francis de Sales and professed first vows at the end of his postulancy and novitiate on Sept. 13, 1951, followed by perpetual profession on Sept. 13, 1954, and ordination to the priesthood May 31, 1960. Father completed a B.A. in Mathematics at Niagara University and an M.A. in Guidance/Counseling at Catholic University of America, Washington, D.C.

Enjoying a rich and varied mix of assignments throughout his 59 years of priesthood, Father Gillespie tried his hand at a number of ministries, including 18 years in secondary education, in Wilmington, Del., and Harrisburg, Pa. He also served as spiritual director at the De Sales School of Theology, Postulant Director, Director of Novices and Religious Superior at both Brisson Seminary and the Salesianum Oblate community.

At the age of 64, Father Gillespie received permission to serve as a missionary in South Africa, historically the first overseas mission to which the Oblates first travelled in 1882. After more than a decade, Father returned to the United States in 2007 to retire. However, in 2008, Father came out of retirement to serve as a Parochial Vicar and later as Priest-in-Residence at St. Ann Parish in Naples, where he stayed until his final retirement in 2017 when he left to live at the Oblate community in Maryland.

A Mass of Christian Burial was held July 31 at Our Lady of Light Chapel, in Childs. Md. Internment followed in the Oblate Cemetery. Father is survived by his twin sisters, Mary Cormier and Van Gillespie.