The first weeks of Advent proved quite busy for the students at Catholic Schools throughout the Diocese of Venice as they lived the call of the Season by committing to making a daily sacrifice for the good of others while also getting into the Christmas spirit with lots of fun activities. 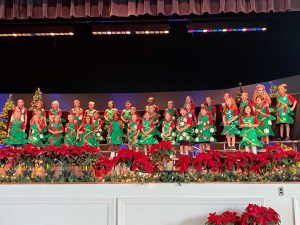 The lesson of Advent, making a sacrifice for others, was found in so many different ways at each of the 15 Catholic Schools. Toy, gift and food drives were held with thousands of items given with love and the joy of the Season to those less fortunate in the region. 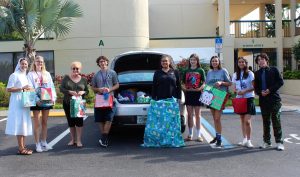 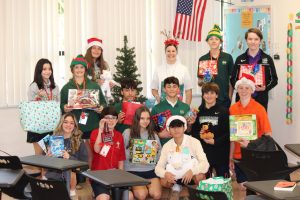 December was a busy time at St. John Neumann Catholic High School in Naples. The amazing YACHT (Youth And Christ Helping Together) Club gathered weeks ago to make homemade Christmas cards for military men and women serving overseas that will not make it home for the holidays. The YACHT Club also sponsored a Neumann Fun Night and gave some of the hard-working students a chance to take in the Victoria Park Christmas Lights via the “Neumann Express,” driven by one of the teachers. The night also included adoration in the chapel and a visit to the convent for a cookie decorating competition, a festive holiday wear contest, and Christmas Jeopardy with the Salesian Sisters of St. John Bosco who serve at the school. 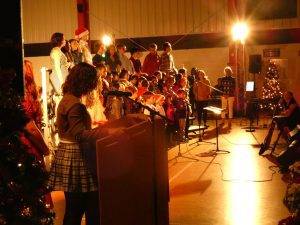 A spirited group of Neumann students also showed off their Christmas enthusiasm at the Collier County Sheriff’s Office’s Winterfest Holiday Walk at the Fairgrounds. The Neumann band performed Christmas songs while another group of students participated in a living nativity and several young alumni hosted games for participants of the Holiday Fest!

Of course, the Neumann generosity has been on display with collections for toys which were distributed to several different charities. The baseball team focused their attention on collecting gifts for 38 children who are assisted through Catholic Charities in Collier County. 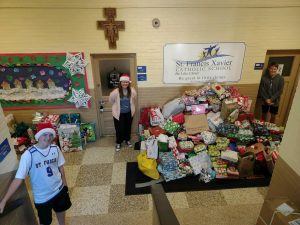 Proverbs 22:9 states: “The generous will themselves be blessed, for they share with the poor.” In Fort Myers, the National Junior Honor Society members from St. Francis Xavier Catholic School took that verse from Proverbs to heart by organizing a “Spread Your Christmas Joy” gift drive to benefit local migrant children served by Catholic Charities. In just more than two weeks, they collected more than 1,500 presents.

Throughout December the students continued to learn the lessons of Advent, preparing for the arrival of Jesus at Christmas. 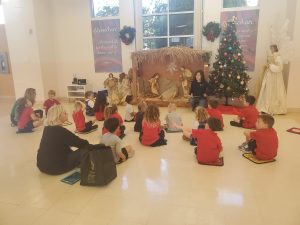 Pre-kindergarten students at St. Martha Catholic School in Sarasota took part in a Christmas Novena. Each morning they prayed and heard the different stories that lead up to the Nativity and sang various Christmas songs. The final day included hearing the story of Baby Jesus and Mary and Joseph. Afterwards they had a giant marshmallow treat. 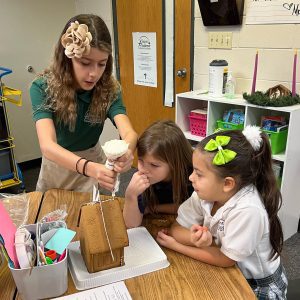 Part of the holiday fun often includes the making of gingerbread houses as the students at St. Andrew Catholic School did on Dec. 14 in Cape Coral. Meanwhile, at St. Elizabeth Seton Catholic School in Naples, the students celebrated the Feast of St. Nicholas by finding treats inside their shoes. This which harkens back to the original story when children left their shoes out in hope of finding small gifts and treats on the Feast Day of this historical Saint. 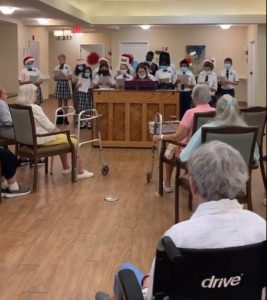 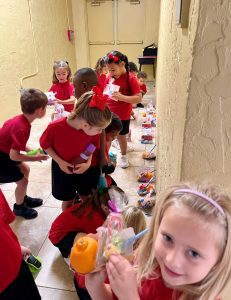 Of course, the Season also brings about pageants, assemblies, and musical celebrations. Many such observances included a retelling of the Nativity and Epiphany in their performances of children of all ages. Some schools took their talents on the road such as the children’s choir of St. Charles Borromeo Catholic School in Port Charlotte who did great job singing for the residents of Parkside Assisted Living and Memory Cottage. The Cardinal Mooney Catholic High School band also performed for shoppers at the University Town Center sharing the sounds of the season with earnest shoppers. 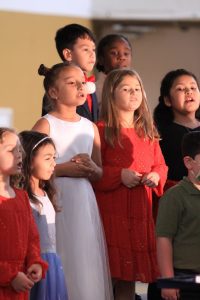 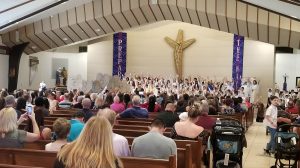 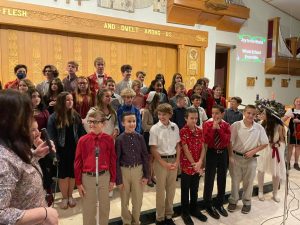 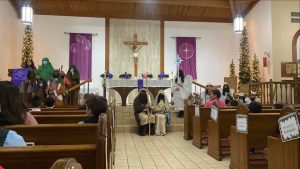