For nearly a quarter century Our Lady of Perpetual Help Retreat Center in Venice has been providing spiritual solace for the faithful of the Diocese of Venice on the banks of the Myakka River. 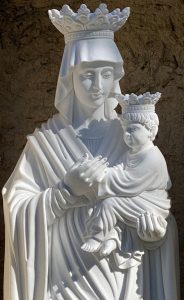 To help enhance the experience, a new Shrine to Our Lady of Perpetual Help is nearing completion. A major milestone was reached on Nov. 19, 2020, when workers installed a one-ton statue of Mary holding the Child Jesus. Long-delayed by the COVID-19 Pandemic and other logistical considerations, the new white marble statue majestically stands in a niche of a large piece of limestone atop a waterfall.

Prominently located on the property, the Shrine is next to the Bell Tower, along a path which leads in one direction to nearby St. Joseph Chapel and in the other direction to the outdoor Stations of the Cross. It is also a short distance from the bridge which leads to the main conference areas. 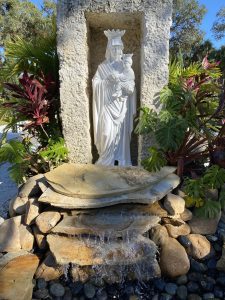 The concept of the Shrine Project began with several donations made to memorialize Redemptorist Father Charlie Mallen, the founding director of the Retreat Center, known by most as OLPH. The Diocese of Venice added to these donations so construction could be done in a beautiful and enduring way.

Father Mallen founded OLPH at the direction of then-Bishop John J. Nevins. With the assistance of Sister Carmella DeCosty, Sister of the Holy Names of Jesus and Mary, Father Mallen developed an overgrown piece of land into a spiritual refuge. The first buildings were blessed and dedicated in January 1996.

Although there will be a plaque to memorialize Father Mallen when completed, the large marble statue of Our Lady of Perpetual Help is the centerpiece of the Shrine. While the statue was being made and delivered, a temporary statue of Our Lady was in its place.

The backdrop of the statue consists of a single large piece of limestone and several Italian cypress trees which produce a vaulted cathedral effect. There is a small waterfall at Mary’s feet which is lit at night to striking effect. The reverse side of the limestone has a crucifix.

The main feature of the Shrine, the monument, is made of 15,000 pounds of Oolitic limestone quarried in Coral Bay Florida by Epic Stonework. The same material was used to create a series of benches, each weighing two-tons. The stairs and floor of the Shrine are made of keystone, and the ramp access is made of travertine. 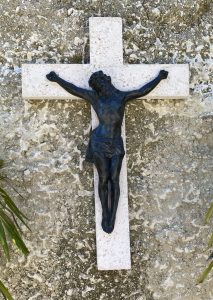 Diocese Buildings Project Manager Joe Rego said the statue is from Fynders Keepers of Stillwell, Kansas, made with marble from China. Treasure Cove of Sarasota, operated by Patrick Hebda, installed the statue and benches, as well as fabricated the crucifix to which the corpus was attached. The landscaping, hardscaping and water feature were installed by Appel Horticultural Services, LLC of Sarasota.

OLPH Director, Father Mark Yavarone, Oblate of the Virgin Mary, said a few finishing touches remain before the Shrine is complete, but that when appropriate, a blessing and dedication will take place.

“We will see when we can do it safely; but expect a big celebration, maybe this time next year, to celebrate the full 25 years,” Father Yavarone said.