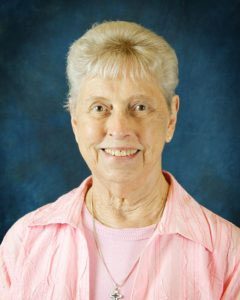 Sister Christine Patrick was born Feb. 5, 1931 in Indianapolis, Indiana, to Walter and Anna Scheidegger Patrick. She was baptized Eleanor Mae.

Sister Christine entered the Congregation of the Sisters of Providence on Feb. 2, 1950, and professed her final vows on Aug. 15, 1957. She earned a degree from Saint Mary-of-the-Woods College and an advanced degree from Indiana University.

In her 70 years as a Sister of Providence, Sister Christine ministered as a teacher and principal for 44 years in schools in Indiana, Illinois, Oklahoma, Washington, D.C., and Florida. Within the Diocese of Venice, she served as Principal of St. Joseph Catholic School in Bradenton from 1995-2004. Upon her retirement she volunteered for Southeastern Guide Dogs in Palmetto and Sarasota, as well as serving at St. Joseph Parish as a minister for the homebound and volunteering with the senior outreach program.