Bob Reddy – Naples – It has been eighteen Septembers since the terrorist attacks on the U.S. shocked the world. Images of destruction, death and fear were seared into the minds of those who watched from afar and are felt deeply in the souls of those who were there in person. 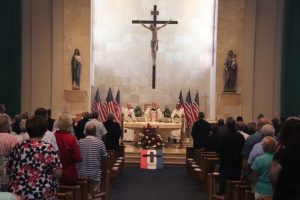 St. Peter the Apostle Parish in Naples hosted an annual Mass on Sept. 11 to commemorate the 18th anniversary since the terror attacks on the U.S. It was in 2001 when terrorist hijacked four airliners and ultimately destroyed the World Trade Center in New York, damaged the Pentagon and caused another airliner to crash in Pennsylvania killing nearly 3,000 and bringing horror to the nation and world.

The main celebrant for the Mass was Father Gerard “G” Critch, Pastor of St. Peter the Apostle, who served as a chaplain next to the fallen towers during the recovery operations. “For those of us who were on the rescue and recovery mission, like myself, this is a very difficult Mass,” Father Critch said as he struggled to continue. “Let’s face it – even after 18 years it doesn’t get easier.”

The opening procession was led by bagpipers playing “Amazing Grace,” followed by retired officers of the New York Police Department and members of the Fire Department of New York. 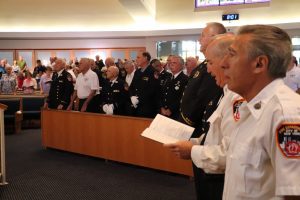 Propped on the steps of the altar was a display of the 9-11 Cross, made from the steel of the World Trade Center which is normally in the Parish Chapel. In addition, there was a piece of rubble from the Pentagon.

During the Mass, Father Critch asked all to pray for those who lost their lives in 2001, and all those in the past 18 years who have suffered in different ways in the aftermath of that horrific day and seek comfort in their lives. “We cry out to the God of healing love to give us His mercy,” Father added.

Even 18 years later, Father Critch noted that to endure we must have a solid foundation upon which to draw strength, to draw consolation, and underpinning all of this foundation “is Love, which Jesus offers to all of us.”

After the conclusion of the Mass, a retired New York City firefighter spoke about how when a member of the Fire Department of New York dies, the code 5-5-5-5 is broadcast to all stations over the radio. A fire bell was subsequently rung in this manner to not only honor 343 firefighters who died on Sept. 11, 2001, but to all who died.

A display in the narthex from the Gulf Coast Retired Firefighters Association included a beam from the World Trade Center as well as posters which showed the faces of all first responders who were killed in New York City on 9-11. Outside was a fire engine from New York City with an emblem from 9-11 noting the attacks in New York, at the Pentagon and in Pennsylvania. 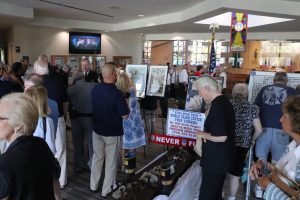 The annual Mass at St. Peter the Apostle Parish came about when Father Critch was assigned to the Parish in 2008 and some of the retired first responders from New York renewed old friendships. The 9-11 Cross was donated to the Parish soon afterwards and the Masses on Sept. 11, now known nationally as Patriot’s Day, have become a central piece of the annual commemorations for many in Collier County.

Father Critch was serving at Sacred Heart Parish in Bradenton in 2001 when a doctor in New York City asked that he come to serve as a chaplain for the triage team. The team comforted and supported the first responders who were actively searching for survivors from the collapse of the Twin Towers. The team was based in the historic St. Paul’s Chapel, which had sat in the shadow of the World Trade Center.

As a young priest, Father Critch served in missions in the Caribbean in the aftermath of earthquakes, hurricanes and volcanoes and thought he could handle any disaster. Those experiences did little to prepare him for his time in New York City following 9-11.

For two weeks, the Chapel was his home, sleeping in the pews when he could with the sound of heavy equipment reverberating outside 24-hours-a-day. During this time, Father blessed the workers as they entered the disaster site, provided the Sacrament of Reconciliation, presided over funerals for victims, and was also called on to bless the remains of those recovered at a nearby Brooks Brothers clothing store which served as a temporary morgue.

Janet Springer knew several people who died in the World Trade Center attacks and is always moved to tears during the annual commemorative Mass. “It is a beautiful Mass in honor of those who were taken away so needlessly,” Springer said. “I always take time to touch the 9-11 Cross because it helps connect me to that day, because I don’t ever want to forget.”