Buoyed by an influx of young people, a group representing the Diocese of Venice gained new insight and worked together to make their voices heard during the 2022 Catholic Days at the Capitol. 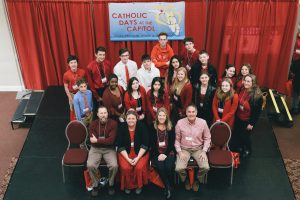 Following a 2021 hiatus, the Catholic Days at the Capitol was Feb. 1-2, 2022, wherein Catholics from across the state gather in Tallahassee to put their faith into action. Some 38 from the Diocese of Venice were among some 200 representing each Arch/diocese in the state. Both Cardinal Mooney Catholic High School in Sarasota and Bishop Verot Catholic High School in Fort Myers sent delegations to the Catholic Days gathering.

Organized by Florida Conference of Catholic Bishops, and within the Diocese by Respect Life Director Jeanne Berdeaux, the Venice group journeyed by bus and participated in each major event.

Activities included a legislative briefing from the Bishops Conference on four key bills that are of significance during the current legislative session and direct visits to the State House and Senate offices of local lawmakers to present the Church’s stance on key legislation. This year, many were able to meet legislators, which is not always possible as they are often unavailable due to their busy schedule during the legislative session. 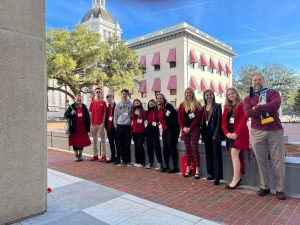 The high school groups were allowed a behind-the-scenes tour of both the House and Senate Chambers. The Cardinal Mooney students also had the opportunity to meet two Mooney Alumni, State Senator Joe Gruters and State Rep. James Buchanan, a special chance they enjoyed immensely.

Another unique experience of some in the Venice group included an opportunity to sit in on a committee hearing on a bill that would protect women and limit the harm of abortion in Florida. The critical bill would prohibit abortion after 15 weeks gestation, shrinking the window of time in which an abortion is able to be legally obtained.

In addition, there was also a shared breakfast with Florida’s Bishops and legislators, as well as the 47th Annual Red Mass of the Holy Spirit which was concelebrated by the Florida Bishops.

One Venice participant described that Catholic Days at the Capitol as a learning experience about being engaged as a Catholic in the happenings of Florida by learning about the laws and trying to speak to the legislators who vote on these important issues.

Another explained how it was great to see the young people take part and have the opportunity to be amongst like-minded Catholics sharing their faith in a public forum.