Bishop Frank J. Dewane led the Act of Consecration from Epiphany Cathedral in Venice, on March 25, 2022, as a “gesture of the Universal Church” to invoke an end to the violence and suffering of the innocents during the war in Ukraine. 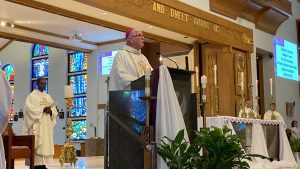 Pope Francis wrote to all the Bishops in the world, asking them to join him in offering “a solemn Act of Consecration of humanity, and Russia and Ukraine in particular, to the Immaculate Heart of Mary.” The Act of Consecration took place on the Solemnity of the Annunciation of the Lord, when the Angel Gabriel told Mary that she would conceive and bear “the Son of the Most High” through the power of the Holy Spirit. 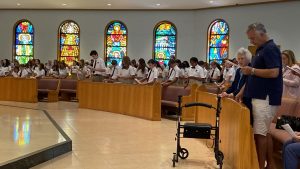 In a nearly full Cathedral, including students from Epiphany Cathedral Catholic School, Bishop Dewane remarked how important it was that the faithful gather “as a people of God, brothers and sisters in Christ, in response to the Holy Father. We gather to pray for the conflict going on in the Ukraine and the suffering that has been inflicted upon the people of Ukraine. It is a Consecration of humanity, as the Holy Father put it – in particular for those in Russia and Ukraine. This is a gesture of not just the Pope, Bishops, or priests, but of the Universal Church.”

The Act of Consecration began at noon, to coincide with the prayers in Rome of the Holy Father. The Diocesan prayer service was livestreamed and available on the Cathedral website and on social media (also available at www.dioceseofevnice.org). Simultaneously, Parishes and Catholic schools throughout the Diocese held their own Prayer services. 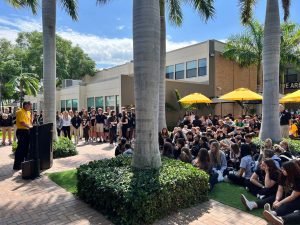 Pope Francis said during remarks from Rome that the consecration “is no magic formula but a spiritual act… It is an act of complete trust on the part of children who, amid the tribulation of this cruel and senseless war that threatens our world, turn to their Mother, reposing all their fears and pain in Her Heart and abandoning themselves to Her.”

The Holy Father added that the Act of Consecration “means placing in that pure and undefiled heart, where God is mirrored, the inestimable goods of fraternity and peace, all that we have and are, so that She, the Mother whom the Lord has given us, may protect us and watch over us.” 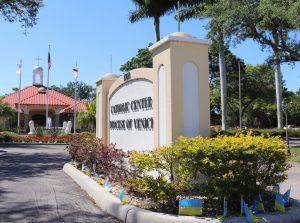 Bishop Dewane added that the Act of Consecration “is about people who are suffering. The Lord calls us to be His instruments and to pray and to call upon our Faith; to call upon Christ; to call upon the saints; to intervene to relieve that suffering that we see so much of – also intervene in that war in Ukraine.”

Bishop Dewane then celebrated the Mass for the Solemnity of the Annunciation of the Lord. 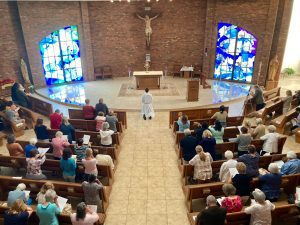 The monument sign and the entrances of Catholic Center and Epiphany Cathedral, both in Venice, have small Ukrainian flags as a sign of unity with the people of Ukraine. 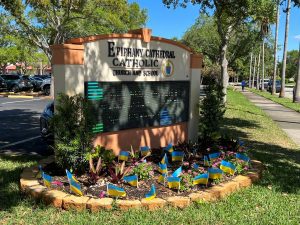 Bishop Dewane has stressed the importance of continued prayer for those suffering. Also, the Diocese of Venice has made it possible for the faithful to contribute toward charitable relief and assist in providing humanitarian aid, as well as necessary recovery efforts.

Donations may be sent to the Diocese of Venice, with “Ukraine” indicated in the memo or note line at the following address: Diocese of Venice in Florida, Ukraine Relief, 1000 Pinebrook Road, Venice, FL 34285, or visit https://dioceseofvenice.org/ways-to-give/ and click the donate button.

Bishop Frank J. Dewane will join Pope Francis on Friday, March 25, 2022, in “a solemn Act of Consecration of humanity, and Russia and Ukraine in particular, to the Immaculate Heart of Mary.” 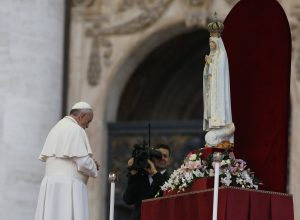 At around the same time – 5 p.m. in Rome – Pope Francis will be reciting the Prayer of Consecration in St. Peter’s Basilica. Pope Francis has invited all of the world’s bishops to join him in this important moment of prayer.

“It is asked that all the Faithful offer prayer at that time, or some time on March 25, to join in the Consecration,” said Bishop Dewane. (Please visit https://dioceseofvenice.org/solemn-act-of-consecration-requested-by-pope-francis-to-occur-in-venice-march-25/ for the text for the Act of Consecration in English and Spanish.)

March 25 marks the Solemnity of the Annunciation, when the Angel Gabriel told Mary that she would conceive and bear “the Son of the Most High” through the power of the Holy Spirit.

By Karen Barry Schwarz – Special to the Florida Catholic 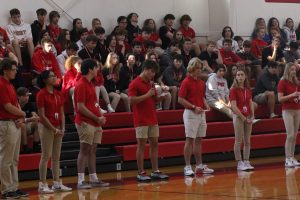 On March 11, 2022, the student body of Cardinal Mooney Catholic High School in Sarasota participated in praying a living rosary as a lead up to Spring Break. A living rosary consists of people representing each bead of the rosary. Each person then leads one prayer of the rosary. Different grade levels represented different decades, including one in Spanish. This was the last group gathering for the students before going on Spring Break.

As the world continues to pray for peace and for the victims of the war in Ukraine, the Diocese of Venice has made it possible for the faithful to support charitable relief and assist in providing humanitarian aid, as well as necessary recovery efforts. Donations may be sent to the Diocese of Venice, with “Ukraine” indicated in the memo or note line at the following address: Diocese of Venice in Florida, Ukraine Relief, 1000 Pinebrook Road, Venice, FL 34285, or visit https://dioceseofvenice.org/ways-to-give/ and click the donate button. Also, please keep the people of the Ukraine in your prayers. 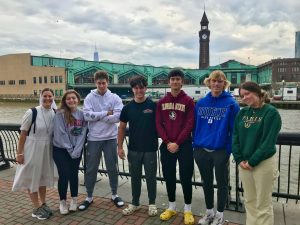 St. John Neumann Catholic High School students, along with Sister April Hoffman, FMA, attended the Salesian Leadership Retreat the week of March 7-11, 2022. The retreat is run by the Salesian Sisters of St. John Bosco, which is the same religious order that leads Neumann. The group stopped in Hoboken, N.J., for a little sightseeing excursion before traveling to Haledon to meet up with more of the Salesian family. While on the retreat, the warm-weather Neumann Celtics also got a taste of snow during a tour of New York City. 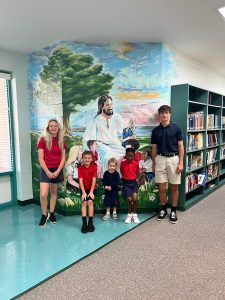 Local artist, Marcus Zotter, is at it again. He painted another amazing mural on an interior wall of the St. Ann Catholic School library. The artwork incorporates the images of five current students. Earlier in the school year, Zotter created a dolphin-themed mural on a nearby exterior wall. 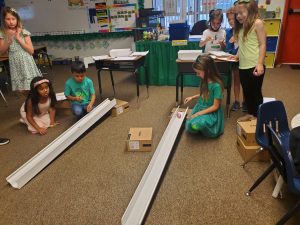 1st Graders at St. Martha Catholic School in Sarasota conducted an Easter Egg Gravity Investigation on March 11, 2022. The young scientists have been learning about gravity and after making their predictions, they did a variety of tests with different types of fresh and plastic eggs on a ramp, at varying levels and kept track of the results in a data table. 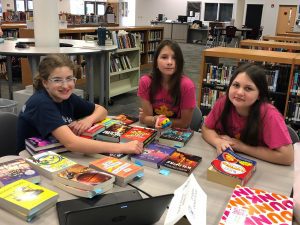 Fasting, almsgiving, and prayer are the three traditional disciplines of Lent, but we are reminded to do these things privately because the Lord knows us and what we are doing. 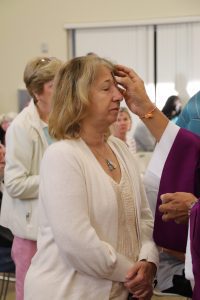 Grand displays are not what the Lord wants, explained Father Robert Tatman, Parochial Vicar of St. Jude Parish in Sarasota. The clear example of this is represented in the ashes marked on one’s forehead to open Lent on Ash Wednesday, March 2, 2022.

“They don’t last very long, but it is not something we want to wear on the outside, just to be seen,” Father Tatman said. “We want it to cleanse and purify our inner heart.”

In addition to opening the Lenten Season, which concludes on Holy Thursday, April 14, on Ash Wednesday the faithful across the Diocese of Venice joined in fasting and prayer for peace in Ukraine as called for by Pope Francis.

As Bishop Frank J. Dewane noted in a letter to the faithful on March 1, “Our Catholic Faith calls each of us to care for those in need, and, at this time in particular, for those who are suffering in the wake of this terrible tragedy.”

In the letter, Bishop Dewane stated that donations made to the collection on Ash Wednesday will support charitable relief for the Ukraine and assist in providing humanitarian aid, as well as necessary recovery efforts.

For those not prepared for the collection, donations may be sent to the Diocese of Venice, with “Ukraine” indicated in the memo or note line at the following address: Diocese of Venice in Florida, Ukraine Relief, 1000 Pinebrook Road, Venice, FL 34285.

As the Lenten Season progresses, the precept of confessing grave sins and receiving Holy Communion at least once during the Lenten Season merits a reminder to all. To facilitate this requirement, every Parish in the Diocese of Venice will be open with a confessor present from 4 p.m. to 8 p.m., on Friday, April 8, and from 9 a.m. to noon, Saturday, April 9. Check with your local Parish for additional confession times or the availability of a Penance Service. These opportunities are made available so that the faithful may find ample opportunity to receive God’s Mercy in the Sacrament of Reconciliation during the Lenten Season.