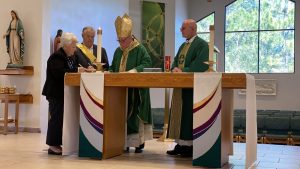 For Bishop Dewane, the installation as Pastor will solidify in the minds of the faithful that Father Antonik is there to serve the Parishioners; Father Antonik has served as Administrator of the Parish since February 2020. Outwardly, there will be no changes in the operation of the Parish but nevertheless the Bishop noted this was an important moment for all of the faithful at St. Therese.

Bishop Dewane reminded the people of St. Therese Parish to support their Pastor in his daily work in administering the Sacraments and orchestrating the spiritual direction of the Parish, while recognizing he will be called to make difficult decisions.

“I ask you to be understanding so as to accept that Christ has put Father here for a reason, and that he is here to serve you,” the Bishop said. “When you disagree with a decision Father makes, find a way to do so as respectfully as you can. But also, when you do agree, stand up make it known. Father needs to hear that.” 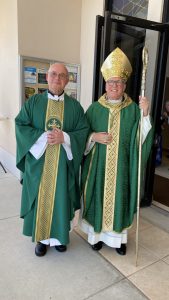 During the installation, the priest begins with selected words leading to the start of the Creed at which point he is joined by the faithful. At the end of the Creed, the new Pastor has extra lines which are exclusive for him. In addition, the Pastor takes an Oath of Fidelity to the Bishop and his successors, formalized by placing his hand upon the Book of Gospels.

The installation ceremony concluded with the signing of documents by the Bishop, the new Pastor, and two official witnesses of the Parish community who serve as witnesses for all of the parishioners.

Father Antonik thanked Bishop Dewane for having the honor of being installed as Pastor of St. Therese Parish. Father also thanked the faithful for their support since his arrival as Administrator and was emotional when recounting the story of calling his mother – who lives in Poland – shortly before the installation.

A new Rector was installed at Epiphany Cathedral in Venice, marking only the fifth time in its history. 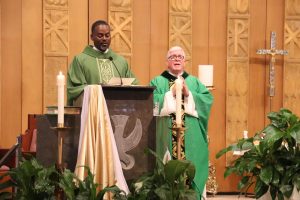 In the context of the Mass on Aug. 8, 2021, Bishop Frank J. Dewane installed Msgr. Patrick Dubois as Rector starting a new chapter in life of the priest and the faithful of Epiphany Cathedral.

Bishop Dewane encouraged the people of the Cathedral to be united behind Msgr. Dubois as he will be called upon to make difficult decisions going forward.

“A priest can’t listen to everyone because it is full of contrasting opinions, but he will make a decision after listening to the people of God,” the Bishop added. “Remember, we receive Christ individually but it’s up to you to lift up the community. It is for all of us.”

As part of the installation process, Bishop Dewane first introduces the priest as Rector to the parishioners. The priest later begins the Profession of Faith for all to hear, including an additional part solely for him. The new Pastor then recites an Oath of Fidelity and promises to “adhere to the teachings, which either the Roman Pontiff or the College of Bishops enunciate when they exercise authentic magisterium.” The installation also includes prayers to provide the new Rector the wisdom and guidance from the Holy Spirit to lead the Parish. 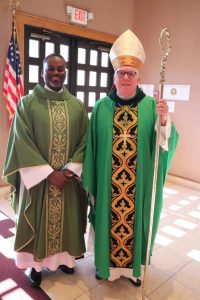 The ceremony concluded with the signing of documents by the Bishop, the new Rector, and two official witnesses of the Parish community, who serve as witnesses for all of the parishioners. Those documents are split between the Cathedral and Diocese as well as Monsignor’s personnel records. A celebratory reception was held in the Parish Hall.

Msgr. Dubois, who is also a part of the Diocesan Tribunal, expressed his gratitude to Bishop Dewane for having the confidence in him to be the Rector of the Cathedral. He also thanked his parents, who were present and brought up the gifts during Mass, for being his living example of the faith.

To the people of the Cathedral, Msgr. Dubois promised that he will live out his ministry grounded in prayer and “together we will continue to make the Cathedral a place of encounter of Jesus to the faithful.”

The history of the Parish dates to the 1930s when the Church of the Epiphany was created as a Mission of St. Martha Parish in Sarasota. It was in 1955 when the Mission was elevated to Parish status. With the Catholic population in Florida steadily increasing, St. Pope John Paul II in 1984 established two new dioceses, one of which was the Diocese of Venice. The Church of Epiphany was selected to become the Cathedral for the new Diocese. Mass is celebrated at the Cathedral in English, Spanish and Polish and representatives from each group were present for the Mass, as well as friends and family of Msgr. Dubois from his previous pastoral assignements.

There are moments in the life of each Parish that are well remembered: the dedication of a new building, significant anniversaries, and of course, the installation of a new Pastor. 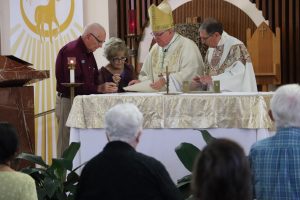 For the faithful of St. James Parish in Lake Placid, such a day occurred June 2, the Feast of the Ascension of the Lord, when Father Vincent Clemente was installed as Pastor by Bishop Frank J. Dewane.

The Ascension was an appropriate time to install and Pastor, because it was when Jesus commissioned the Apostles to go out into the world and spread the Gospel. The Church, in creating its structure, has established Parishes to help orchestrate that effort. The leader of a Parish is appropriately a Pastor who will give the impetus to the faithful to go forward out into the world to live the Gospel by spreading the Good News through their words and actions.

Bishop Dewane encouraged the faithful to offer advice to their new Pastor but also know that he will be called to make difficult decisions that not everyone will appreciate. “He needs your support through prayer and the gifts of the Holy Spirit. Let the decisions that are to be made become a part of who you become as a Parish community.” 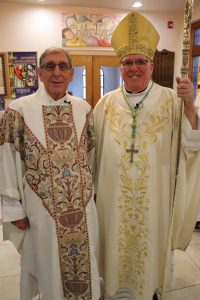 During the installation, the priest begins with selected words leading to the start of the Creed when he is then joined by the faithful. At the end of the Creed, the new Pastor has extra lines which are exclusive for him. In addition, the Pastor makes an Oath of Fidelity to the Bishop and his successors; formalized by his placing his hand upon the Book of Gospels.

Following the installation, two members of the parish, representing the entire congregation, served as witnesses and signed the formal documents, copies of which are left at the Parish, placed in the Diocesan archives and in the personnel file of Father Clemente. Bishop then introduced the new Pastor to a rousing applause.

Father Clemente thanked Bishop Dewane for his appointment and commented on how hospitable the Parish community has been since the day he was first assigned.

After the installation, a reception was held in the Parish Hall.