The Diocese of Venice is stepping up to provide a pre-recourded Catholic Mass at prisons throughout the State of Florida is helping incarcerated men and women gain spiritual strength during a time when they are isolated as never before.

This was the message given from Florida Department of Correction (FDOC) State Chaplain Johnny Frambo to Diocesan Prison Outreach Volunteers during a gathering on Oct. 30, 2020 at St. Maximilian Kolbe Parish in Port Charlotte.

Frambo explained how the Diocesan Prison Outreach, with the direct support of Bishop Frank J. Dewane, worked to provide a variety of resources to the FDOC to ensure that there was continued access to religious materials and programming that volunteers would normally provide.

The effort included the donation, from a member of the faith community, of televisions as well as the ability to create and upload programs to prison tablets through a program called JPAY. Each state inmate is provided with a tablet through JPAY which provides controlled access for content such as emails, video visitation and other services without wireless services. 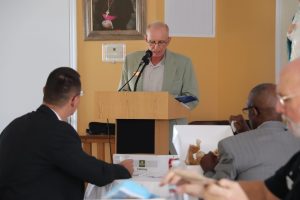 This effort was facilitated by Diocesan Prison Outreach Co-Coordinators Bob Hiniker and Joe Mallof, with the assistance of Anne Chrzan, Diocese Director of Religious Education. Items for upload include the Mass and religious education programming and other materials which focused on the teachings of the four pillars of the Catechism of the Catholic Church. This meant that the effort was developed from scratch and uploads to the tablets through the FDOC. This religious education programming is part of a larger effort to increase access to Catholic content for prisoners in the state facilities during the Pandemic and beyond.

“Thank you for all you have done and continue to do to help those men and woman to hear your spiritual voice and guidance during this time of inner discovery and self-improvement before they go back into the world and restart their lives as transformed individuals,” Frambo concluded.

Before the COVID-19 global Pandemic effectively shut down access by volunteers to prisons and jails, some 150 volunteers, including 26 priests and 11 deacons, assisted with religious education and formation at 10 jails, six state prisons and four work camps. These volunteers normally provide a variety of religious programs, such as Bible study, religious education and assistance with formation before receiving the Sacraments including as Baptism, First Holy Communion and Confirmation, as well as the Mass. Bishop Dewane regularly visits prisons for Mass and confers the Sacraments when possible.

Hiniker shared an update on how each prison and jail policy has evolved in recent months with some allowing limited volunteer access while others remain off limits.

“We have adapted many of our programs in the best way possible, but we are limited based on the restrictions each facility has,” Hiniker added.

Bishop Dewane, who celebrated Mass for the volunteers, praised the group for choosing to answer a specific call from God to serve the incarcerated, those who are often marginalized or forgotten by society.

“They are as much a part of this Diocese as anyone else and must have access to pastoral care, which you provide through your selfless dedication as volunteers,” Bishop Dewane said. “You do not go there to solve what put them there. It is not important why they are there. It is important that they are placed before us and we have to be that instrument of the Lord – the evidence of God’s love to others.”

Hiniker and Mallof also presented information about two different outreach programs that are starting to be introduced in the state prisons including grief sharing and an effort to help the incarcerated transition to life after prison.

The Grief Share program is a 13-week process designed to help the incarcerated deal with different types of grief they may face, such as for whatever crime they may have committed, for the loss of freedom, for the loss of connection to family, the death of loved ones and much more.

The Bridges to Life is a re-entry program which promotes healing for the incarcerated and for victims, aiding and placing them in the positive mindset that they will be able to succeed and become productive citizens again. This mentoring effort also helps to prepare those about to be released for the realities of the modern world of technology and transitioning back into society and the workforce. A key component of this effort is the prepare former inmates how to answer questions about their incarceration on job applications and then to handle job interviews.

A huge challenge faced the Diocese of Venice Prison Outreach when the COVID-19 pandemic forced the Florida Department of Corrections (FDOC) to limit outside contact with prisoners.

This limited contact to restriction of group gatherings in the prisons themselves for fear of the spread of virus. This left the men and women with no access to religious education programs or materials.

Thanks to a cooperative effort between the Diocese of Venice and the FDOC, work has been done to facilitate a new virtual religious education program focused in support of the prisoners. This was facilitated by Diocesan Prison Outreach Co-Coordinators Bob Hiniker and Joe Mallof with the full support of Bishop Frank J. Dewane.

With no prisoner access to religious programs, Hiniker and Mallof reached out to Anne Chrzan, Diocese Director of Religious Education, seeking materials or courses that are in a format which can be uploaded onto individual tablets. Each state inmate is provided with a tablet through a program called JPAY which provides controlled access for content such as emails, video visitation and other services without wireless services.

This meant that any effort would have to be developed and uploads to the tablets through the FDOC. This religious education programming is part of a larger effort to increase access to Catholic content for prisoners in the state facilities during the pandemic and beyond. 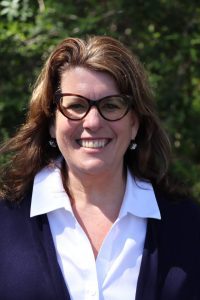 Chzran explained that offering courses on the Catechism of the Catholic Church are a good first step in providing a strong foundation for growing in the Faith while the inmates have many hours of free time while confined in their cells.

“Each of the four pillars of the Catechism are being developed into short minicourses and uploaded onto the JPAY tablets for all Catholic inmates,” Chzran said. “These courses will provide the inmates with reading and reflection on scripture and prayer, sacraments, the Creed and morality. The first pillar of the Catechism, ‘Scripture and Prayer,’ has been developed over the past month and will be uploaded onto the JPAY tablets soon. “

An effort is being made to ensure these programs will also be made available in Spanish.

When the prisons are open to Prison Outreach, about 150 volunteers, including 25 priests and 10 deacons, are providing a variety of religious programs, such as Bible study, religious education and assistance with formation before receiving the Sacraments such as Baptism, First Holy Communion and Confirmation, as well as the Mass. Bishop Dewane regularly celebrates more than a dozen Masses in state correctional facilities each year also conferring the Sacraments on numerous inmates.

When Hiniker and Mallof realized the access to the prisoners was not going to be a temporary issue, they approached Bishop Dewane to propose an new outreach program for inmates. This effort was made with the encouragement and support of Father Severyn Kovalyshin, Region 3 Chaplain, and the State Chaplain Johnny Frambo.

The first part of the outreach included a donation of televisions, made possible with private support. These TVs were installed in state prison dormitories with the agreement that they would air the Diocesan-produced TV Sunday Mass for the Homebound.

Mallof said FDOC officials were so grateful for the donation that they were willing to allow the Diocese to provide content through the JPAY system, including the religious education courses.

The other content includes the Mass. This came about because even with the televisions, not everyone would be able to see the Mass in ideal conditions. The FDOC agreed to allow the Diocese to also produce the Mass for upload to the JPAY tablets at the start of each month. Hiniker and Mallof reasoned that this would allow the inmates viewing and reference access to the Mass at any time, making it an ideal situation.

Because Bishop Dewane is known to the inmates at many of the state correctional facilities, he agreed to be the celebrant for the first four Masses which will be available for viewing in June. Going forward, the Masses will be identical to what will air each Sunday for the homebound.

Adapting to the changing nature of access to the state prisons has allowed the Diocesan Prison Outreach to be at the forefront in ensuring that this important program reaches the people in need.

“The relationship we have and continue to build with the chaplains, by strengthening their position within the FDOC, will bear additional future fruits in ways yet to be seen,” Mallof said.