Preparations are beginning within the Universal Church for the upcoming Jubilee year, due to be held in 2025.

The Jubilee was announced in late February, and in light of the recent Covid-19 pandemic, which left no country unscathed, Pope Francis writes that he has chosen the motto “Pilgrims of Hope,” for the Jubilee. 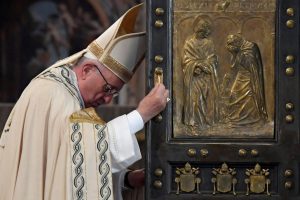 The Holy Father said his hope is that we can recover “a sense of universal fraternity and refuse to turn a blind eye to the tragedy of rampant poverty that prevents millions of men, women, young people and children from living in a manner worthy of our human dignity.” This highlight of hope by the Holy Father comes at a time of war in the Ukraine.

Pope Francis noted that “the Jubilee has always been an event of great spiritual, ecclesial, and social significance in the life of the Church.” The Holy Father recalled that ever since the year 1300, which marked the first Holy Year, “God’s holy and faithful people has experienced this celebration as a special gift of grace, characterized by the forgiveness of sins and in particular by the indulgence, which is a full expression of the mercy of God.” Initially instituted by Pope Boniface VIII, the Jubilee years were initially every 100 years, and then following Biblical precedent, every 50 years, and finally every 25 years.

Pope Francis then recalled “the Great Jubilee of the year 2000,” describing it as having “ushered the Church into the third millennium of Her history.”

In that regard, the Holy Father continued, St. John Paul II had “long-awaited and greatly looked forward to that event, in the hope that all Christians, putting behind their historical divisions, could celebrate together the 2,000th anniversary of the birth of Jesus Christ, the Savior of humanity. Now, as the first 25 years of the new century draw to a close, we are called to enter into a season of preparation that can enable the Christian people to experience the Holy Year in all its pastoral richness.” 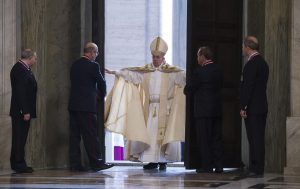 The Holy Father said that a significant step on this journey was already taken with the celebration of the Extraordinary Jubilee of Mercy (2016), “which allowed us to appreciate anew all the power and tenderness of the Father’s merciful love, in order to become, in turn, its witness.”

A key part of a Jubilee is the opening of the Holy Door, Pope Francis said. These are special doors at the Vatican, and key Basilicas, which are only opened during Jubilee years. As part of tradition of the Jubilee, the faithful, frequently at the conclusion of a lengthy pilgrimage, draw from the spiritual treasury of the Church by passing through the Holy Door and venerating the relics of the Apostles Peter and Paul preserved in Roman Basilicas. During the Extraordinary Jubilee of Mercy, Holy Doors were designated at each Cathedral worldwide, as well as at designated pilgrimage Churches (Epiphany Cathedral in Venice and Our Lady of Mercy Parish in Boca Grande).

Pope Francis reminds us that true hope is not built on human words or assurances, but on God’s Word and His promise of salvation and eternal life. “We must fan the flame of hope that has been given us and help everyone to gain new strength and certainty by looking to the future with an open spirit, a trusting heart and far-sighted vision. The forthcoming Jubilee can contribute greatly to restoring a climate of hope and trust as a prelude to the renewal and rebirth that we so urgently desire; that is why I have chosen as the motto of the Jubilee, ‘Pilgrims of Hope.’”

The Catechism of the Catholic Church (1817) states “Hope is the theological virtue by which we desire the kingdom of heaven and eternal life as our happiness, placing our trust in Christ’s promises and relying not on our own strength, but on the help of the grace of the Holy Spirit.”

A request for comments in response to the question “What does hope mean to you?” was shared on social media. Here are a variety of the responses:

Pope Francis said our pilgrimage towards the Jubilee “will express and confirm the shared journey that the Church is called to make, in order to be ever more fully a sign and instrument of unity in harmonious diversity. It will be important to foster a renewed awareness of the demands of the universal call to responsible participation by enhancing the charisms and ministries that the Holy Spirit never ceases to bestow for the building up of the one Church.”

Please visit www.dioceseofvenice.org for the latest updates on the coming Jubilee year.