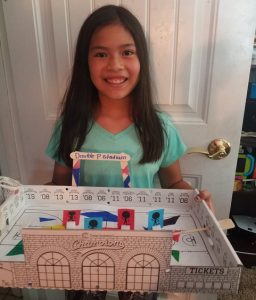 Connected to their teachers via online Zoom sessions, students were empowered to follow the “Invention Process” as they collaborated, innovated, designed prototypes and learned from their failures. Program kits were sent directly to the students’ homes ahead of time so they could actively follow along and learn.

Students learned about flight with gliders, rockets, and robots. They constructed paper airplanes and measured their flight path and even built air traffic control towers. In addition, the students also investigated, took apart and customized a high-tech flight simulation robot. 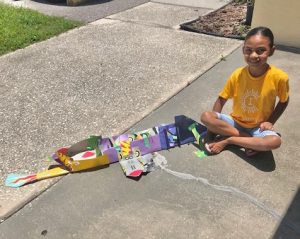 They drew sketches, built prototypes, and designed logos for a new invention they created. Later the students created parachutes to air-drop different animals into different environments.

The inventors also designed and produced energy-efficient LED plant lights and even manufactured their own biodegradable pot and later planted seeds. 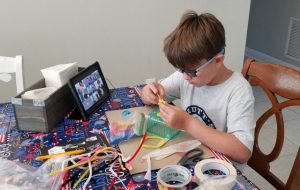 Participants discovered the unseen inventors behind their favorite sports and then designed and built their own ultimate sports complex. Students used simple machines to roll a ball during a table-top game.

Through these activities, students gained essential skills they can apply throughout their lives.

This STREAM program is just the latest in cutting-edge educational opportunities provided to students at St. Joseph Catholic School. To learn more about the school, please call 941-755-2611 or visit https://www.sjsfl.org/

It was more than fun and games at the St. Michael Parish summer camps for boys and girls in Wauchula. During back-to-back weeks in early June, young boys, and then young girls, converged on the Parish grounds and participated in eight hours of daily spiritual enrichment mixed in with fun and outdoor games. 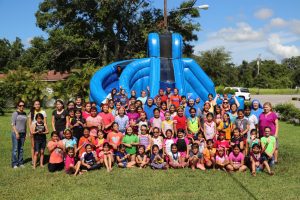 Each summer, the Parish Religious Education team organizes the camps for the boys (June 4-8) and the girls (June 11-15). The camps are for children from first through sixth grade and offer a chance for the Parish staff to keep connected with the young people when regular religious education programs are closed for the summer.

The children described the week in the simplest of terms: “Fun!” “Awesome!” “Great!” “Perfect!” Beautiful!” “Terrific!” If the smiles and excitement for each day were not enough, the impact of the camp was the lively participation of everyone in each of the activities throughout each week.

The theme for the camps this year was “Obedience!” At daily Mass, Parish Administrator Father Timothy van Zee, Institute of the Incarnate Word, stressed the importance of obedience, trying to explain the concept on a level the young children could clearly understand.

“The best reason is because Jesus gave us that example. We need to be like Jesus if we want to be happy and if we want to get to heaven,” said Father van Zee. “Even when you are asked to do something you don’t want to do; it is better to obey. If you do that, you become a better person, more like Jesus.” 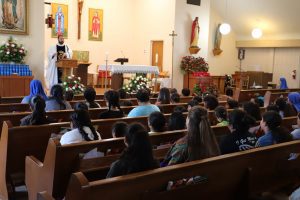 Each camp day had a serious religious and spiritual element, including prayer and an examination of conscience. The early part of the schedule included a talk about the Holy Mass with a presentation covering different aspects of full, active and conscious participation in the Mass. This encompassed the proper way to use a holy water font when entering the Church; the need to genuflect facing the tabernacle and the altar; and a review of the prayers and music.

A key component of the preparation was a daily reinforcement of how to behave when going forward for Holy Communion. For the youngest children, this meant crossing their arms indicating they were not of age to receive the Eucharist and bowing their head to be blessed by Father van Zee. For older children, it was a reminder to respond clearly when the Holy Eucharist is presented to them.

Following Mass, there were additional prayers lead by a religious sister and then they were free to head to a breakfast of pancakes, fruit, milk and juice.

Other parts of the day included some fun and games as well as productive team-building exercises. Small teams competed in the various activities throughout the week with an emphasis on support and teamwork. Points were accumulated for various token prizes. 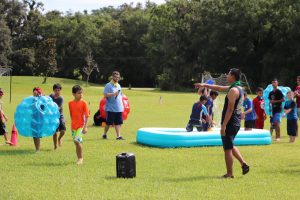 This was important in helping the young boys and girls realize that they can accomplish much more with the help of others than if they tried to do the same thing alone. Because it is the summer, many of the outdoor activities included water, providing some of the funnier moments of the week.

In the afternoons, different activities included learning about the life of different saints, presentations on the stage in the Parish Hall, and more indoor games. The girls also had the opportunity to bake. Days concluded with snack time, singing and then a recitation of the Holy Rosary. Each week also included a field trip to the Tampa Bay area where they went to indoor amusement facilities.

Each week culminated in a celebration for the parents with presentations from each team. The girls also served fresh baked pizza.

The camps were organized by Sister Maria Gema de Jesus Ruiz, a Servant of the Lord and the Virgin of Matará, Director of Religious Education at St. Michael Parish. However, they would not have been possible without the support of the other religious women at the Parish and the hard work by the entire Parish community, including the parent and teen volunteers. Among those volunteers were several Diocesan seminarians who helped with the boys, and an extra religious sister from Washington, D.C., who assisted with the girls.